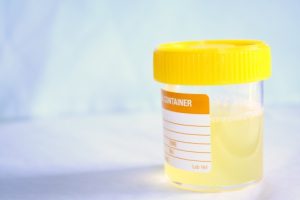 Having cloudy urine is not unusual and, in many cases, it is no reason for alarm. However, it just might be a sign of an underlying health condition.

Healthy urine is clear and light yellow in color. Unhealthy urine can be cloudy, hazy, or milky looking. This can occur for a number of different reasons, including sexually transmitted diseases, dehydration, infections, or diseases that affect other body systems along with the urinary tract. While cloudy urine in men does happen, women get it more often since their bodies lend itself to E. coli forming in the bladder.

Cloudy urine with odor is possible. This can be alarming and can happen in all age groups. Many people experience cloudy urine with no pain, while others feel a burning sensation when they urinate.

All of the symptoms you might experience along with the cloudy, hazy appearance of urine should be described in detail to a physician for proper diagnosis and treatment.

Symptoms vary depending on the cloudy urine causes. Signs of a problem can originate in the urinary tract, the reproductive system, the endocrine system, the cardiovascular system, as well as other organs.

Since urinary tract infections are so common, here we list some possible symptoms:

Here are some symptoms that could indicate something other than a UTI is the problem.

Some people panic the second they notice that they have cloudy urine. Cloudy urine during pregnancy is one example of that, but it is often nothing to worry about.

Here are some other possible causes of cloudy urine in the general population:

That annoying frequent urge to go, but then passing only a small amount of urine is a very common symptom to watch out for. You’ll also experience a burning or itching feeling when you pee. Check your urine in the toilet bowl – if it’s bloody or cloudy, dark in color, or bad-smelling, this can also be a sign of UTI.

A main responsibility of the kidneys is to produce urine, but this can change in kidney problems. Some patients may urinate more frequently, experience discomfort, and urine may appear foamy, bubbly, or cloudy.

Kidney stones can result in cloudy urine, too, along with pain, nausea, blood in urine, fever, chills, and difficulty peeing.

Also read: Essential oils for kidney stones: How to use and recipes

Inflammation or Infection of the Prostate Gland

Aside from cloudy urine, other symptoms of inflammation or infection of the prostate gland include pain or burning while urinating, difficulty urinating, urinary urgency, cloudy urine, blood in urine, abdomen pain, pain or discomfort of the penis or scrotum, painful ejaculation, and flu-like symptoms.

Symptoms of a simple bladder infection include frequent urge to urinate, only small amounts of urine are expelled, sudden urges to urinate, pain, burning or discomfort when urinating, urge to urinate at night, pain in lower abdomen, blood in urine, urine is cloudy, unpleasantly odorous or has a strong scent

One of the earliest signs of diabetes is changes in urine including frequency and appearance. Urine can appear cloudy as a result of excess sugar leaving the body through urine. Diabetes can also cause kidney damage which can break down your kidneys filters which can contribute to cloudy urine.

Pyelonephritis is an infection within the renal pelvis. The infection often stems from the bladder. Its causes are similar to that of a bladder infection. Symptoms include pain, nausea, vomiting, cloudy urine, and diarrhea.

Retrograde ejaculation is when the semen goes into the bladder rather than exiting the penis. Although this condition isn’t harmful it can lead to infertility. Symptoms include little to no semen being ejaculated, cloudy urine due to semen being in the urine, and male infertility.

Chyluria is characterized by the presence of chyle in the urine, giving it a milky appearance. Chyle consists of lymph and lipid particles and is bodily fluid normally found within the lymphatic system, which carries digested fats from the small intestine to the bloodstream. These lipid particles are commonly known as chylomicrons, which are composed of fats and proteins.

Water dilutes urine and the lighter or clearer it is that indicates your level of hydration. So, if your urine is cloudy and dark that’s a sign you need to drink more.

As an inflammatory response to a sexually transmitted disease, you may pee out puss which causes urine to appear cloudy. For some, STD symptoms may not be noticeable except for changes in urine, and that is why it’s so important you always check what’s left in the toilet as indication of what is occurring with your health. 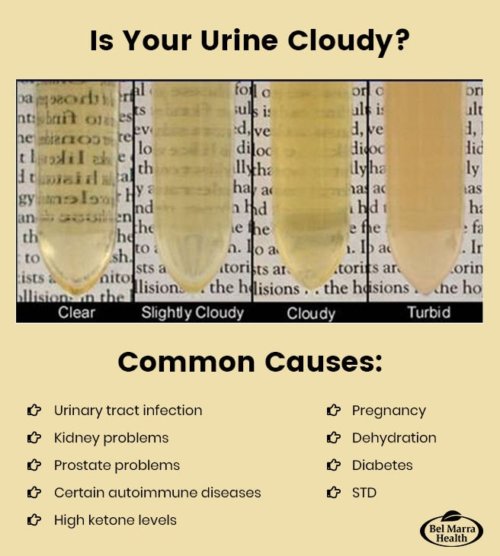 People with high blood ketone levels that are on a low-carb diet or perhaps fasting, as well as those who have difficulty controlling diabetes can have urine with an odor. With ketone, a sweet, acetone-like odor in the urine can be detected.

Cloudy urine with odor can also be a sign of dehydration, especially if it smells like ammonia. If you have a urinary tract infection or when you are pregnant, your cloudy urine can also be foul smelling.

Keep in mind that normal looking urine can also have an unusual odor from time to time. This is due to food consumption. Beer, garlic, and coffee are a few examples of foods that tend to give urine a strong odor.

Cloudy urine in men and women

It’s no secret that men and women are made different, so how urine becomes cloudy for each of the sexes is naturally different. After sex, some sperm can remain in the urethra and cause bubbles to form froth on the surface of the urine in the toilet bowl when urinating. In a healthy male, the sperm, which finds its way into the urethra, usually clears within minutes.

An enlarged prostate, a prostate infection, prostate cancer, epididymitis (swelling of the scrotum), and sexually transmitted diseases are some of the main reasons for cloudy urine in men.

Women can experience cloudy urine in pregnancy, but also due to sexually transmitted diseases, yeast infections, or endometriosis, which is uterine tissue in the bladder.

Most doctors report that both men and women tend to assume a urinary tract infection is what they have when symptoms first appear. It is important to be properly assessed to determine if it is a UTI or something else.

Cloudy urine in pregnancy does become an issue if it is related to proteinuria. This happens when urine contains high protein concentrations and is an early sign of preeclampsia.

About two to four percent of women develop urinary tract infections when they are pregnant. Abdominal discomfort, including slight pain in the pelvic region, may by indicative of a UTI. Treatment under the close supervision of a doctor is crucial to clear up the infection.
.


How to treat cloudy urine?

If your urine is cloudy and has an odor due to your diet, the solution is simple. Stop eating the foods that cause the odor. When cloudy urine is caused by a urinary tract infection or bladder infection, it is normally treated with antibiotics and clears up in a couple of weeks.

Cloudy urine due to kidney stones is fairly common and is treated with pain medications to lessen the discomfort. When the stones don’t pass naturally, a specialist can break them up with an ultrasound treatment or shock wave so you can pass them.

Proteinuria is often a sign of high blood pressure and in the case of pregnancy it requires careful treatment. In some cases, bed rest and medications to lower blood pressure are recommended.

There are many possible causes of cloudy urine and, therefore, treatment varies. If you constantly have cloudy urine, pain, or blood, you should seek medical attention immediately. It could be something that requires a quick fix or it could be a sign of an underlying health issue that needs longer-term care.

Hydrotherapy: drinking plenty of water helps cure cloudy urine. The cloudiness of urine typically occurs due to dehydration and is generally harmless. Flushing out the system and your kidneys is a great natural way to get regular again

Baking Soda: the same stuff used for baking a cake can be used to alleviate inflammation and symptoms of a UTI. Baking soda is alkaline in nature and helps neutralize the acidity in urine, reducing the symptoms of a UTI. A single teaspoon is often enough to help prevent cloudy urine and UTI. It can be consumed by mixing it in some water and swallowed with relative ease.

Blueberry Juice: packed full of antioxidants and compounds, blueberry juice can help inhibit and even eliminate the UTI causing bacteria. Fresh blueberries in lieu of juice is also great.

Pineapples: containing an active enzyme, Bromelain, pineapples have been found to aid in fighting off UTIs.

Cranberry Juice: one of the best natural remedies for UTIs, cranberry juice prevents E. coli (the most common cause of UTIs) from sticking onto the lining of the urinary tract. It helps in both prevention and treatment of UTIs.

Parsley: a common herb that is one of the best home remedies for cloudy urine. When mixed with water, it acts as a natural diuretic, helping increase the frequency of urination and increase the amount of sodium clearance from the kidney which helps neutralize the acidity in the urine

Celery: packed with vitamins and antioxidants, celery can help eliminate UTI causing bacteria. It is a common home remedy for cloudy urine and UTIs.