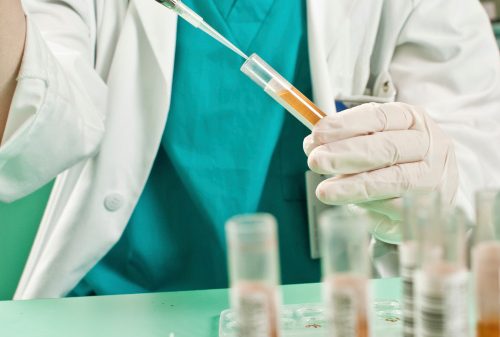 Chyluria is characterized by the presence of chyle in the urine, giving it a milky appearance. Chyle consists of lymph and lipid particles and is bodily fluid normally found within the lymphatic system, which carries digested fats from the small intestine to the bloodstream. These lipid particles are commonly known as chylomicrons, which are composed of fats and proteins.

Having milky urine may be a feature of another condition such as urinary tract infection, sexually transmitted diseases, kidney inflammation, and nephrotic syndrome. While they may appear similar, they are different from chyluria.

Thoracic duct obstruction: Considered a major lymphatic vessel, with obstruction occurring due to an aortic aneurysm or cancer in the chest cavity or possibly due to pregnancy. This causes backflow of chyle towards the kidneys.

Parasites: It is not clear whether parasites are actually responsible for causing the leakage of lymphatic fluid into the urinary tract or if it’s merely a coincidence, but the fact remains that the condition occurs when they are found in the body. Known causative parasites include Eustrongylus gigas, Taenia echinococcus, malarial parasite, Taenia nana, Ascaris, S. haematobium, and Ceronomas hominis. However, the most important and the most common cause-effect relationship of chyluria is with Wuchereria bancrofti.

Lymphatic kidney vessel obstruction: Leads to backflow of lymphatic fluid into the urine. This can be caused by parasites, tuberculosis, congenital disorders of the lymphatic vessels, lymphangioma of the urinary tract, kidney trauma or surgery, pernicious anemia, or diabetes mellitus

Nephrotic syndrome: A kidney disorder that results in excessive protein and fat excretion into the urine

What are the symptoms of chyluria?

The primary symptom is a thin, milky, possibly foamy urine. Chyluria may be intermittent or have a waxing and waning course, but it also may be recurrent. In addition to milky urine, chyluria symptoms may also include:

How to diagnose chyluria

Chyluria diagnosis will depend on the suspected underlying cause, but generally, it uses various laboratory tests and imaging to help reach a diagnosis. The following tests are commonly used to reach a chyluria diagnosis:

Urine tests: Can be a practical test looking for the disappearance of milky urine after a fat-free diet. Also, it can be used to assess the level of albumins in morning urine as well as the total level of triglycerides and chylomicrons after a fatty meal.

Blood tests: Can be used to look for the presence of parakites using an immunochromatographic test. Also, it can be used to assess for low blood proteins (hypoproteinemia, hypoalbuminemia), as well as increased eosinophils; a type of white blood cells that are known to increase during parasitic infections

Imaging: Computerized tomography (CT) or magnetic resonance imaging (MRI) can be useful tools for looking for enlarged lymph nodes or the presence of obstruction of the thoracic duct by a tumor or abscess. Additionally, X-rays via lymphangiography, intravenous urography, or retrograde pyelography can help identify the site of chyle leakage. Ultrasounds may also be used to find a chylous clot in the bladder.


How to treat chyluria

Treatment of chyluria will depend on the cause. Some instances, like in the case of congenital causes or tumors, may not be able to be treated medically but have to be surgically treated.

However, some cases of chyluria may resolve spontaneously or with conservative measures. This may be accomplished by adhering to a low-fat diet.

Reducing fats in the diet decreases its excretion into the urine. The following recommendations are often given to those looking for a diet to help resolve chyluria: