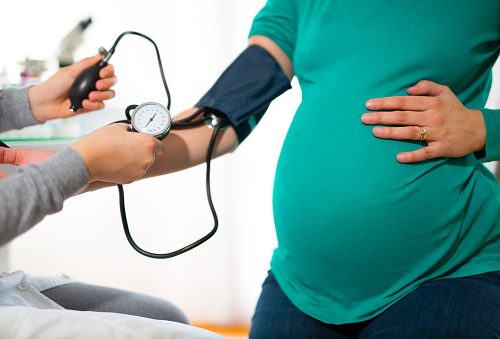 Preeclampsia (toxemia) is strongly linked to hypertension, stroke risk, and heart disease risk during pregnancy. Guidelines set out by the American Heart Association/American Stroke Association (ASA) recommend that women with a history of preeclampsia be screened and treated for high blood pressure, obesity, smoking, and high cholesterol in order to reduce their risk of stroke, heart disease, and heart attack.

It is estimated that six to 10 percent of pregnant women suffer preeclampsia, which is a dangerous spike in blood pressure later in the pregnancy.

Preeclampsia has been found to double the risk of stroke and increase the risk of hypertension by four times, compared to women who do not develop preeclampsia.

Director of the Stroke Center at Wake Forest Baptist Medical Center Cheryl Bushnell said, “Many women and even clinicians are not aware of this association. Women who may think of themselves as very healthy may have this little blip of vascular disease during their childbearing years. What happens during those years is extremely important.”

Stroke has risen to be more common in women than men in the U.S. with over 795,000 strokes occurring in women annually. Stroke is also deadlier in women, with 60 percent of strokes resulting in death among women.

Steering clear of smoking is heavily stressed throughout the ASAs guidelines as it is a large contributor to stroke risk and the leading cause of preventable death in the U.S. Even secondhand smoking increases a person’s risk of death by 20 to 30 percent.

Men and women do share many common risk factors for stroke, but women are at a higher vulnerability, which includes pregnancy complications, use of birth control pills, hormone replacement therapy, and a higher prevalence of migraines, visual disturbances, and atrial fibrillation after the age of 75.

Women with a history of preeclampsia should be screened and treated for hypertension, obesity, smoking, and cholesterol.

Pregnant women with severe high blood pressure should be treated with hypertension medication that is safe to take during pregnancy.

Women smokers who suffer from migraine with aura should stop smoking to reduce the risk of stroke.

Women over the age of 75 should be screened for atrial fibrillation as their risk of stroke is five times greater than in men in the same age group.

Aside from a greater risk of stroke, heart attack, and heart disease, preeclampsia can contribute to other health complications, such as lack of blood flow to the placenta, meaning the baby will receive less nutrients and less oxygenated blood. Oher preeclampsia-related birth defects are placental abruption, where the placenta separates from the uterus prior to delivery, and HELLP syndrome. HELLP stands for three main features of the syndrome: hemolysis (the destruction of red blood cells), elevated liver enzymes, and low platelet count. HELLP syndrome is life-threatening to both baby and mother. Uncontrolled preeclampsia can also result in eclampsia, which is the development of seizures.

Depending on the severity of preeclampsia, your labor may have to be induced or an emergency cesarean section may have to take place in order to reduce the risk to you and your baby.