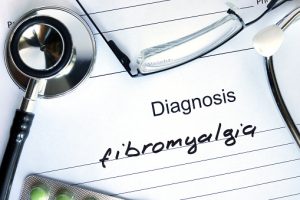 Both disorders are debilitating and can negatively affect a person’s quality of life. Furthermore, both conditions can result in chronic pain. And yet, despite their shared similarities, they are two unique conditions with different symptoms, diagnostic processes, and treatment methods.

Due to this overlap, the two conditions may be confused with one another during the initial diagnostic process until further testing is completed to confirm the diagnosis.

Now that we know which signs and symptoms are the same, let’s examine each condition’s own unique symptoms.

Fibromyalgia generally causes muscular pain, and patients often have tender points, which are areas that are most sensitive to pain and are common among patients. In order for a doctor to confirm a fibromyalgia diagnosis, they must be able to not only find any other underlying causes for the patient’s symptoms, but also run all possible tests to rule out other causes.

Diagnosis of both fibromyalgia and multiple sclerosis is done by ruling out all other causes for symptoms. As mentioned, fibromyalgia is diagnosed when all other conditions are ruled out. Furthermore, patients would have to have experienced muscular pain for at least three months for fibromyalgia to be considered. Tender points are also used in the process of fibromyalgia diagnosis along with analyzing the symptoms.

Multiple sclerosis diagnosis occurs with a multitude of testing including a spinal tap and MRI scans. Your doctor may also perform other tests, including blood work, to rule out other conditions. The MRI scan looks for lesions on the brain and spinal cord, as these are signs of multiple sclerosis.

There is no cure for either fibromyalgia or multiple sclerosis, so once a diagnosis is confirmed, your doctor will offer treatment methods in order to help minimize symptoms. Fibromyalgia may be treated with over-the-counter painkillers, prescription medications like antidepressants, alternative remedies such as acupuncture, massage, and yoga, and even lifestyle changes including improving sleep schedule, exercising regularly, limiting caffeine intake, and reducing stress.

Either condition is not life-threatening, but both are life-altering. Adjustments would need to be made in order to live with either multiple sclerosis or fibromyalgia. Although it may be stressful, working closely with your doctor and reaching out to the loved ones can help ease stress and improve treatment.

Fibromyalgia disability status is linked to severe symptoms, higher medication use, and physically demanding jobs. A study revealed that 30 percent of Canadians who suffer from fibromyalgia – a condition characterized by chronic pain – have a disability status. Continue reading…