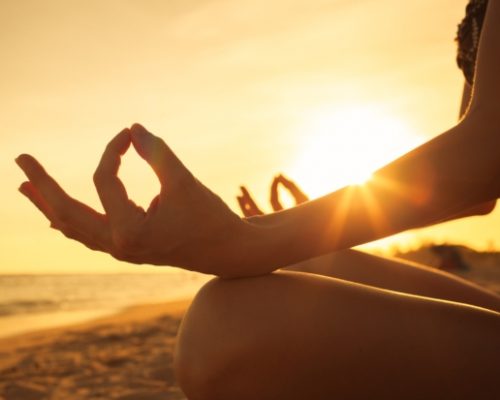 Millions of Americans suffer from severe depression or anxiety, and while some people have turned to antidepressants to help quell the symptoms, we have learned that yoga breathing exercises can be effective for some people.

Antidepressants were discovered by accident back in the 1950s when scientists were searching for a schizophrenia treatment. They found that a drug that adjusted neurotransmitters, which are chemicals that control mood and pain, sent patients into a state of euphoria. While this made the schizophrenics’ condition worse, the experts concluded it would be effective for people who are fighting depression. The problem is, antidepressants come with side effects and in some cases people have to go through multiple medications before they find one that actually works for them. There are some situations where no antidepressants work for an individual. Now, a study published in the Journal of Clinical Psychiatry suggests that a breathing-based meditation called Sudarshan Kriya yoga can help alleviate severe depression in people who don’t fully respond to antidepressant treatments.

As it turns out, more than half of the people in the United States who take antidepressants don’t fully respond to them. In the study led by doctors in the department of Psychiatry at the University of Pennsylvania, there was significant improvement in symptoms of depression and anxiety in medicated patients who suffered from major depressive disorder when they participated in the yoga breathing technique. After two months of participating in Sudarshan Kriya yoga, the patients cut their depression rating score by several points.

The yoga technique can be practiced in groups or at home. It includes a series of rhythm-specific breathing exercises that can bring people into a deep, restful state. Slow and calm breathing is alternated with fast breaths. Yoga breathing, which is really a manipulation of breath movement, has been known to have a positive impact on immune function, nervous system imbalances, and psychological disorders, such as depression and anxiety.

Supporters of Sudarshan Kriya yoga believe that most of us use a very small percentage of our lung capacity and don’t use breath enough to detoxify and cleanse the body.

The authors of the Penn study are encouraged by their results. They say it is important to find new ways of treating depression that work for people who do not respond to traditional treatments. They also insist that Sudarshan Kriya yoga is easy to learn and easy to incorporate, no matter what your lifestyle might be.
The word Sudarshan means “good” and the word Kriya means “action”. So how can you go wrong with good action? Well, yoga is considered a safe form of exercise. This means that if you are healthy and receive initial instruction from a qualified yoga instructor, you should have no problems doing yoga. Sudarshan yoga and other forms of yoga are often practiced in combination.

Some forms of yoga can be more physical than the breathing exercise described here. According to the Mayo Clinic, there are some situations where physical yoga could pose a risk. For example, if someone has a herniated disc, severe balance problems, or uncontrolled blood pressure, they should consult with a doctor before starting a yoga program that incorporates physical action. As for Sudarshan Kriya yoga, it is really an ancient practice that has been revived in modern times. Many years ago, early adopters believed that our breath is an indicator of our mood and our mood is an indicator of our breath. If this is true, then how we breathe can adjust our mood and our mood can adjust our breath.

Research like the University of Pennsylvania study continues around the world. Experts are conducting trials, reviews, and other studies to learn more about the impact of yoga on different aspects of both our physical and mental health.