Home » General Health » Bladder » What Are the Various Causes of White Particles in Urine? 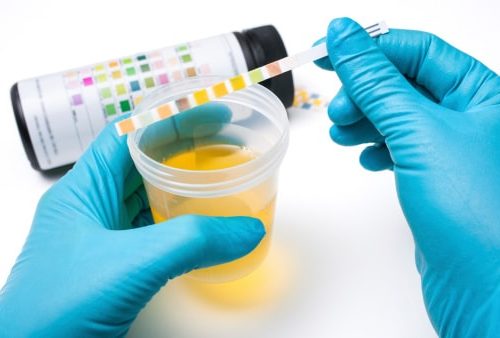 Urine is normally a pale-yellow color. However, sometimes people see white particles in their urine that can be a sign of a health problem.

Most people know that when they eat certain foods, such as beets, blueberries, or asparagus, their urine can harmlessly change color. There are also cases where white particles in urine appear.

What are white particles in urine? In some situations, they can be a sign that you need to drink more fluids to help dilute the concentration of waste that is eliminated from your body. But other times, it could signal an infection or another health issue.

What Causes White Particles in Urine?

Here’s a detailed look at causes of white particles in urine:

Urinary tract infections are one of the main causes of white particles in urine. Bacteria can lead to an infection in the urinary tract. Certain fungi, parasites, and viruses can also cause this type of infection.

In most cases, a UTI affects the urethra or bladder in the lower urinary tract. However, they can also affect the ureters and kidneys, which are in your upper urinary tract. Men and women can experience discharge from a UTI that includes white particles in the urine.

People who have a UTI usually experience a burning sensation when urinating, frequent urination, lower abdominal pain, cloudy urine, and urine with a strong odor. Women and men can have pelvic pain and men can also experience rectal pain. Urinary tract infections are generally treated with antibiotics.

STIs can also cause changes in urine. Anyone who suspects that they have a sexually transmitted infection should avoid sexual contact so that they don’t spread the STI and immediately seek medical attention.

When levels of substances like uric acid or calcium oxalate get too high in the body, kidney stones develop. Kidney stones that are small often pass through urine without people even knowing it, or they may appear as small white particles.

Kidney stones can cause considerable pain in the abdomen. Feeling like you have to urinate frequently, having difficulty urinating, feeling a burning sensation during urination and having smelly, cloudy, or bloody urine are symptoms of kidney stones.

Also read: Essential oils for kidney stones: How to use and recipes

Sediment can be found in some urine samples. They’re microscopic gritty particles that float in the urine and are often made up of various cell types and debris that sheds from the urinary tract. Most people who suffer from urinary tract infections are prone to sediment in their urine, which may contain bacteria, white blood cells, and protein.

This is essentially inflammation of the bladder. The inflammation is usually due to a bacterial infection, such as a UTI. Bladder infections can be painful and become serious if they spread to the kidneys. Sometimes, cystitis can be a reaction to drugs, radiation treatment, or irritants such as spermicidal jellies, feminine hygiene sprays, or the prolonged use of a catheter.

There are situations where cystitis is a complication linked to another illness. People with cystitis have a strong urge to urinate, along with pelvic discomfort, blood in the urine, smelly urine, and occasionally a low-grade fever.

This is a condition caused by chyle in the urine. Chyle is made up of lymph and lipid particles normally found within the lymphatic system, which transports digested fats from the small intestine to the bloodstream. People who have chyluria usually have urine that appears milky.

Causes of White Particles in Urine in Women

When we talk about what causes white particles in urine, it can be helpful to distinguish between males and females.

White particles in the urine of females can often be attributed to bacterial vaginosis or yeast infections.

Bacterial vaginosis is inflammation of the vagina that happens when there’s an imbalance of natural-occurring bacteria. Normally, women won’t notice any painful symptoms, but they may see thin, gray, white, or green discharge. If the discharge comes out when urinating, there may also be white clumps in the urine.

Bacterial vaginosis can be itchy or cause a burning sensation. It can also create a fishy odor. As far as yeast infections go, they are caused by an overgrowth of yeast fungus known as Candida albicans in the vagina. Thick, odorless discharge is common with this type of infection. The discharge may have white particles in it. Itching, burning during urination or sex, redness, and swelling are typical symptoms.

Causes of White Particles in Urine in Men

White particles in the urine of males can be caused by retrograde ejaculation or prostatitis.

Retrograde ejaculation is when men have dry orgasms. In other words, little or no semen is ejaculated. In these cases, the sphincter that would normally prevent semen from entering the bladder doesn’t contract, so the semen flows into the bladder instead of out through the penis.

When men who have retrograde ejaculation urinate after the act, they might notice semen in their urine that looks like white particles. While this condition doesn’t come with any serious symptoms, it can reduce fertility rates. In fact, there are situations where infertility treatment is required in order for couples to conceive.

When a man has inflammation of the prostate gland, it’s called prostatitis. It’s usually caused by a bacterial infection near the gland. The infection can cause discharge that can leak into the urine when a man has a bowel movement and that urine can look like it has white spots in it. Symptoms include pain when urinating, lower abdominal pain, difficulty urinating, pain in the testicles, painful ejaculation, foul-smelling urine, fever and chills, as well as low libido. Treatment usually requires antibiotics.

Now that we have outlined what causes white particles in urine, it’s important to summarize the most common symptom associated with these causes.

The appearance of white particles in urine may change, depending on the cause, and they can appear in different ways, including:

If you notice white particles in your urine that don’t seem to be going away and you have other symptoms, you should seek medical attention. In the case of infections, treatment is crucial so that the infection doesn’t spread or lead to infertility. Here are some signs that should tell you it’s time to visit a doctor:

It’s important to keep track, at least in our heads, of what we have consumed. This means foods, medications, and supplements. These can all impact the color and odor of urine and in some cases create what look like white spots. While it’s not necessary to run off to the doctors every time your urine color looks a little off, white particles in urine along with the signs outlined here are symptoms that shouldn’t be ignored.