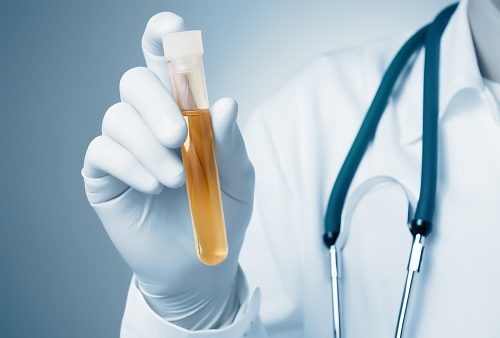 Our kidneys’ function is filtering the blood and producing urine that is primarily made up of water and other substances. The chemical composition of urine typically consists of uric acid, carbon, calcium, and nitrogen. And sometimes, crystals in urine can be found. When the normal functioning of the kidneys becomes compromised due to various abnormalities such as dehydration, it can lead to changes that result in excessive crystal formation.

Causes and symptoms of crystals in urine

Crystal formation in the urine may be caused by any of the following:

Dehydration. Due to insufficient fluid intake, the few minerals in the urine can harden and form crystals. When there’s less water in the body, the concentration of composites such as uric acid radically increases. The result: crystals composed of uric acid found in the urine.

Urolithiasis. When crystals have been in the urine for prolonged periods of time, one can develop urolithiasis or bladder stones. If these stones are large enough, one may suffer with constant abdominal pain.

Diet. Eating foods that are high in protein can in some cases lead to the development of crystals in the urine. Too much protein consumption may also increase the uric acid as well as calcium content of the urine, promoting crystal formation.

Generally speaking, there are no signs or symptoms indicating that you have crystals in the urine. When crystals are found they often point to other problems in the urinary system.

The following are the most common types of crystals found in the urine:

Depending on the cause of your particular case of crystals in the urine, your doctor will prescribe a corresponding treatment plan. However, there are some things that you can do on your own:

Manage urine pH. Consuming oxalate-rich products, such as coffee or chocolate, can increase the acidity of your urine.

Monitor protein intake. By limiting the amount of protein eaten, you will prevent your kidneys from overworking. The intake of purine-rich foods such as organ meats, sardines, and anchovies should also be reduced. It is better to consume foods like chicken, lentils, and salmon, but still in moderation.

Stay hydrated: Keeping your body well hydrated dilutes the urine and prevents crystal formation. You should aim to drink at least eight glasses of water a day.