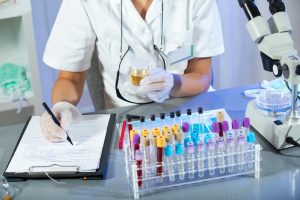 Mucus in urine is excreted by the mucus membranes, which are located in the urethra and urinary bladder lining, and then gets mixed with the urine. Mucus secretions are often thin and fluid in appearance.

Mucus in urine is common and oftentimes it does not imply any health problem. On the other hand, anything in excess does indicate a possible problem – an infection, for example – which may require treatment.

Common causes of mucus in urine

Normal discharge: Mucus is urine is a normal occurrence because it originates in the urethra and bladder membranes. The mucus contains proteins carried from the kidneys to the bladder. During menstruation and ovulation, vaginal secretions and the cervical mucus are also present in the urine.

Urinary tract infections: UTIs are quite common, especially among women. When bacteria enter any part of the urinary tract system, an infection can develop. If left untreated, a UTI can impact the kidney function and damage the epithelium of mucus membrane. As a result, the epithelium is shed as mucus threads in the urine.

Sexually transmitted diseases: Common STDs such as chlamydia and gonorrhea are usually associated with an increased mucus content in the urine. In chlamydia, discharge may appear whitish, while in gonorrhea, it is yellowish.

Irritable bowel syndrome: IBS can lead to a greater release of mucus in urine and in the stool. If a person defecates and urinates at the same time, then the urine gets mixed with mucus from the anus.

Bladder cancer: In some cases, mucus in urine can be a sign of bladder cancer – accompanied by blood in the urine.

Kidney stone disease: Kidney stones can increase the amount of mucus in urine. Urine may also appear dark, and passing of the stones is accompanied by severe pain.


Types of mucus in urine 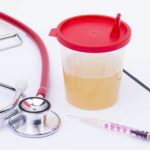 There are two main types of mucus that show up on laboratory tests: threads and corpuscles. Threads appear as fibers bundled together to form a pale, irregular, longitudinal fragment that is narrow on one end.

In the urinalysis, the doctor will check whether these mucus threads or corpuscles in the urine are rare, few, moderate, or many.

Treatment options for mucus in urine

The treatment depends on the cause of mucus in urine. For example, if the mucus content in urine is high due to a urinary tract infection, then your doctor will prescribe antibiotics to treat the infection. If the cause is IBS or ulcerative colitis, then it’s important that you make the necessary diet adjustments in order to manage these digestive conditions. This means avoiding foods that lead to digestive symptoms – like gassy foods, raw vegetables, wheat, or dairy products.

Practicing safe sex is also important to prevent sexually transmitted disease. Staying well hydrated ensures that bacteria and other toxins are flushed out.

Lastly, some causes of mucus in urine will require anti-inflammatory medications, which in turn can decrease the amount of mucus.