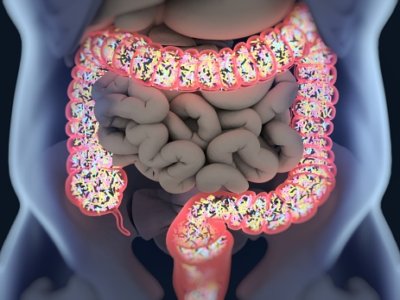 Researchers have recently found that colitis can be treated by the precision editing of gut bacteria. Precision editing was used on the gut’s bacterial population in a mouse model of colitis to lower or intercept the intensity of inflammation. This research was conducted at the UT Southwestern Medical Center.

Dr. Sebastian Winter, Assistant Professor of Microbiology, explained that the potential strategy targets only those metabolic pathways that are significant during intestinal inflammation. These lower or intercept inflammation in a mouse model of colitis while showing no remarkable effect in control animals with healthy functioning and balanced bacterial populations. He said, “Our results provide a conceptual framework for precisely altering the bacterial species that line the gut in order to reduce the inflammation associated with the uncontrolled proliferation of bacteria seen in colitis and other forms of inflammatory bowel disease.” He further explained that in this study, a particular form of tungsten was used. Tungsten is a heavy metal that is essentially harmful in high doses. While it is not advisable to ingest heavy metals, now with the existence of a drug target, their goal is to find a safe method that provides a similar effect.

Dr. Sebastian Winter went on to explain that the vast diversity of the gut microbiota is one of the main reasons why it is do difficult to understand it’s biology. Hundreds of different bacterial species are found in the human intestinal tract itself and even the composition of these species has a remarkable potential to vary between individuals. Many human diseases such as Crohn’s disease, ulcerative colitis, IBD, type 2 diabetes, HIV-related intestinal disease, and colon cancer witness a change in the composition of the gut microbiota.

In order to inhibit the pathogen’s metabolic tricks, the current study used a form of the heavy metal tungsten. By doing so, the researchers found that the bacteria takes up the tungsten and integrated it into an important bacterial cofactor. As a result, this poisoned cofactor does not function effectively in the inflamed gut and restricts the Enterobacteriaceae’s ability to produce energy. Oral administration of tungstate (a soluble tungsten salt) in drinking water partially intercepted the growth of Enterobacteriaceae in the intestine in mouse models. Owing to the fact that their energy-producing metabolism is not dependent on that specific cofactor, the nearby beneficial bacteria remained unaffected.

Dr. Sebastian Winter further explained that this strategy does not get rid of Enterobacteriaceae completely and only curbs their growth during an intestinal inflammation. He further added that this finding is important because in sufficient ratios, Enterobacteriaceae also resists colonization by bacterial pathogens. So, during inflammation, removing these bacteria from the system is not advisable and controlling their growth is a far more effective method of treatment. Although experimental evidence is limited, it has observed that changes in the gut microbiota composition can lead to deterioration and therefore worsen disease.

Is the precision editing of gut bacteria a full-proof way of treating colitis?

In this study using mouse models, researchers reported that with regard to lowering the gut inflammation and creating a balance of bacterial species, the tungstate treatment of colitis rearranged gut microbiota to a considerably normal state. Although the disease wasn’t cured, the overall health of the animals was improved.

So far, the focus has always been on treating the human host in traditional therapeutic approaches. The results show that tungsten could effectively reduce gut inflammation by inhibiting the growth of Enterobacteriaceae while allowing beneficial bacteria to grow, which rebalances the gut microbiota.