Home » Colon And Digestive » What does pancolitis mean? Causes, symptoms, treatment, and diet 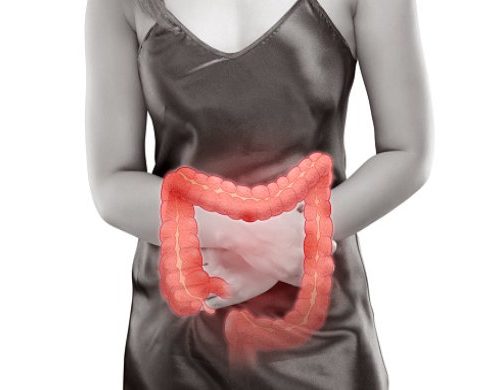 Pancolitis refers to inflammation of the entire colon. The word is quite descriptive in itself as the word “pan” means all or entire, while the word “colitis” refers to inflammation of the colon. This is often a result of a medical condition, most commonly ulcerative colitis (UC), which is a disease that is known for causing inflammation and ulcers (sores) in the lining of the large intestine. Approximately 20–40 percent of UC patients suffer from pancolitis.

Other inflammatory condition may also cause pancolitis and include autoimmune diseases such as rheumatoid arthritis (RA) and infections with bacteria such as Clostridium difficile.

Genetic predisposition: Having a positive family history of ulcerative colitis increases your chances of developing the condition, and thus increases your chances of developing pancolitis. While the exact causes of UC are not known, it is believed that a genetic factor exists that may be passed down from generation to generation. Having a close relative with UC, such as a parent, sibling, or child, makes you at high risk for the condition.

Smoking: There are literally thousands of different toxins found in cigarettes. Of the many, formaldehyde, nicotine, and cyanide can irritate the blood vessels lining of the digestive tract, possibly giving rise to life-threatening blood clots. Another toxin known as carbon monoxide can lower the amount of oxygen in the bloodstream, creating further issues to yourself and others around you.

Environmental determinants: Depending on where you live and your access to the basic necessities of life, such as clean water and nutritious food, they may have an impact on the development of inflammatory conditions like pancolitis. There are certain parts of the world, such as the northern parts of Europe and America, where the reported occurrences are higher for pancolitis. The geographic location of patients may be a factor, but this is not known for certain.

Air pollution: Inhaling small particulate matter, such as soot and aerosol, may aggravate the gastrointestinal tract leading to inflammation. These small particles can gain access to the body through your nose, mouth, and even in some cases, through the skin.

Diet: It is believed that a diet high in carbohydrates and fats increases the severity of inflammation of the epithelial lining in the colon. This is further emphasized as certain Asian cultures, whose diet consist of low carbohydrate and fat content, are seen to be less prone to developing the disease.

Unsuitable medication: A particular type of acne medication known as Accutane can present with serious side effects in the digestive tract causing swelling.
Intestine conditions: Diseases and disorders of the intestinal tract affecting normal function can cause pancolitis. This may include bacterial or viral infection, birth defects and congenital disorders, intestinal obstruction, food poisoning, appendicitis, and toxin ingestion.

Abdominal conditions: This includes any medical condition that affects the abdomen and its internal organ. The most common of which is ulcerative colitis.

Digestive problems: Abnormalities occurring at any part of the digestive tract, which begins with the mouth and ends with the anus, can be a potential trigger for pancolitis. Medical conditions involving the digestive tract include duodenal ulcer, fecal incontinence, dysentery, esophageal achalasia, and Whipple disease.

Having bowel inflammation for many years can be quite dangerous, not only to your immediate digestive health but to your life as well. It is well known that those with poorly treated ulcerative colitis, and by extension pancolitis, have a greater risk of developing bowel cancer.

What are the signs and symptoms of pancolitis?

Abdominal pain: Can vary from mild to severe in intensity. Pain may be exacerbated by bowel movements.

Mucosal hemorrhage: The process of inflammation in the intestinal tract leads to ulcer formation. This essentially erodes or damages the mucosal tissue lining, increasing the possibility of intestinal bleeding. This often leads to bloody diarrhea.

Diarrhea: Some cases of bowel inflammation cause the colon to contract more than it relaxes, moving your stool through the intestines at a faster rate. Because your bowel has less time to solidify your feces, they often come out in liquid form. This will often lead to dehydration and electrolyte imbalance.

Fever: Often a finding in moderate cases of pancolitis accompanied by anemia due to rectal bleeding.

Fatigue: A profound lack of energy and muscle weakness that can be due to the effect of anemia and/or due to the toll the particular inflammatory disorder is having on the body.

Weight loss: Often due to the lack of absorption of nutrients in the intestinal tract. Diarrhea often negatively affects this symptom as well.

Night sweats: Characterized by repeated episodes of extreme perspiration that may soak nightclothes or bedding. This symptom is often a feature of an underlying medical condition or illness.

How to diagnose pancolitis

Stool test: Useful for assessing the possibility of infection or parasites being the cause of pancolitis.

Blood test: Will be able to indicate conditions such as anemia, which will hint at the possibility that blood is being lost through the intestinal tract. There are also certain blood markers that help point to a certain diagnosis, such as C-reactive protein, which indicates the presence of inflammation in the body.

Sigmoidoscopy: Uses a flexible tube-like apparatus with a camera on the end to view all the areas of the intestine starting from the rectum to the sigmoid colon. Physicians are able to look for any signs of inflammation or other abnormal signs that may point to a particular diagnosis. A biopsy may also be taken to be evaluated under a microscope.

Colonoscopy: Very similar to a sigmoidoscopy but can view the entire intestinal tract instead of just a portion.

Barium enema X-ray: With the use of ingested contract material and then taking an X-ray of the abdominal area, doctors can get a good idea of how the digestive tract looks like in its current state.

CT and MRI: Both can give highly detailed images of internal structures that can help doctors make more informed medical decisions and treatment plans.


How to treat pancolitis

5-Aminosalicylic acid derivatives: Effective anti-inflammatory medication that can be used in mild to moderate cases of pancolitis. Medications in this class include sulfasalazine, mesalazine, olsalazine, and balsalazide.

Corticosteroids: A class of steroid medication that has powerful anti-inflammatory and immunosuppressive properties.

Immunomodulators: A type of medication that helps to regulate or normalize the immune system. Methotrexate and cyclosporine are commonly used.

Surgery: In cases unresponsive to medication, surgery may be the only option. While surgeries such as a colectomy will cure cases of pancolitis, it will result in the patient having to excrete their stool through a hole in the stomach that empties into a plastic bag, which will then have to be discarded and replaced.

While there are several factors to consider when dealing with pancolitis, your diet is an area that can still have a positive effect on the condition. Adhering to a balanced diet rich in protein from sources like meat, fish, and soy will help your body receive essential nutrients it cannot make on its own. Also, by eating plenty of fruits and vegetables, you are giving your body the vital vitamins and minerals needed to keep all immune and metabolic processes running smoothly.

It is also recommended to stay hydrated and eat small but frequent meals, as these two factors can affect intestinal processes. Additionally, it may be a good idea to avoid spicy and hot food as well as reduce your intake of high fiber items such as beans, bran, nuts, and seeds.