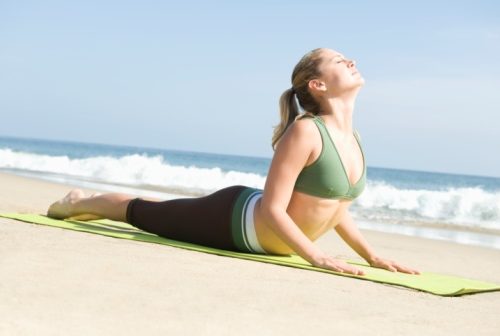 It’s safe to say that most people try their best to reduce stress. Some choose a medicated route, perhaps choosing to drink alcohol or smoke cigarettes to take the edge off, while others choose healthier approaches to deal with stress, such as exercise.

However, there are people who have a much harder time dealing with bouts of stress, as the cause for their stress is due to an internal bodily abnormality, as seen in patients with ulcerative colitis (UC). But a recent study has found that UC patients who participated in yoga found significant relieve from their stress-induced symptoms.

“Many people use yoga to increase their quality of life. Our study suggests that it might be worthwhile to consider yoga as part of a multimodal integrative approach for treating ulcerative colitis,” said Prof. Holger Cramer, lead author of the Alimentary Pharmacology & Therapeutics study.

Ulcerative colitis is an inflammatory bowel disease (IBD) that results in long-lasting inflammation and ulcers (sores) in the digestive tract, primarily affecting the gastrointestinal lining of the large intestine. The condition can often be severely debilitating and sometimes lead to life-threatening complications. While the symptoms of UC can vary from patient to patient depending on the extent of inflammation present, doctors can often classify the condition according to the part of the colon that is inflamed. The following are the signs and symptoms commonly seen with ulcerative colitis.

Typically, ulcerative colitis patients have mild to moderate symptoms, with its course varying. Most see periods of remission but often relapse during times of stress.
In this study, a clinical trial of 77 ulcerative colitis patients who were in clinical remission but reported experiencing reduced quality of life as a result of their condition were separated into two groups: one group who was considered the controls were only given advice on how to better manage their symptoms, while the other group was assigned to do 12 supervised 90 minute weekly sessions of yoga. What the researchers discovered is that those who participated in the yoga sessions saw a greater increase in their quality of life and reduced activity of their colitis when compared to those who were given written self-care advice.

Prof. Cramer and his colleagues find these results very promising, suggesting that regular yoga exercises could very well be a valuable adjunct to conventional medical therapies for ulcerative colitis.

Related: Yoga and sleeping positions to relieve gas and bloating