Home » General Health » Fatigue after eating? Reasons why you feel tired after you eat 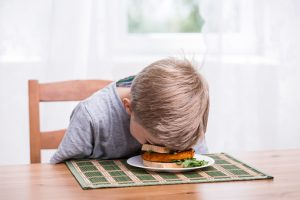 You’ve just polished off a great lunch and are now feeling your energy wane and your eyes getting heavy. It happens to many of us, though few people actually know why they experience fatigue after eating. Find out a few possible causes for this sudden tiredness below.

Reactive hypoglycemia: After a meal full of carbohydrates, you may experience reactive hypoglycemia, which leaves you feeling extremely fatigued after eating and may also lead to headaches, irritability, and light-headedness. This occurs because the excess of carbohydrates cause your insulin production to spike and raise your blood glucose. When you are finished digesting, your blood glucose levels drop dramatically, resulting in a sugar crash.

Tryptophan: Tryptophan increases the production of serotonin, the neurotransmitter responsible for mood, sleep, and regulating bowel movements. Consuming foods high in tryptophan causes a rise in insulin leaving you feeling drowsy after your meal.

Allocation of resources: The theory that blood and oxygen are allocated to the digestive system in the same way they are to the muscles when working out has not been scientifically backed, but could explain the fatigue felt after eating.

Certain conditions: Diabetes and hypothyroidism can also cause fatigue after eating, as diabetes can reduce the absorption of glucose, while hypothyroidism makes the thyroid glands unable to produce enough thyroid hormones.

Food quality: Eating food with minimal nutritional value will leave you tired and fatigued after eating. In contrast, vitamin rich foods can help boost energy after a meal.

Meal portions: Eating large portions of unhealthy foods can leave you feeling sleepy. Livestrong suggests reducing the portion size of meals and eating more frequently so your body can digest smaller amounts at a time, which will leave you feeling less tired after a meal.

Allergies: Consuming a food you are allergic too can result in fatigue, as your body works to get rid of the allergen, expending energy as your immune system protects the body.

Suppression of orexin: This is the most significant peptide that controls wakefulness and is most active in the hypothalamus. Eating too many carbs subsequently leads to increased glucose levels in the bloodstream, leading the suppression of orexin.

Inflammation: The body releases messengers called cytokines that initiate the inflammatory process. Cytokines like TNF and IL-1b can suppress orexin—the peptide responsible for wakefulness. Foods that can cause inflammation may lead to significant fatigue.

Orexin and Blood pH: The orexin peptide is very sensitive to minor changes in blood ph. Scenarios of increased alkalinity results in orexin to become suppressed leading to fatigue.

Leptin: This is a hormone responsible for the feeling of satiety—a satisfaction of our hunger. Leptin has also been found to increase inflammation, making us feel tired. Interestingly, leptin hormone levels are seen to increase more from carbohydrates rather than from protein or fat.

Parasympathetic activation: This relates to the part of the nervous system that is responsible for regulating the body’s unconscious actions. It is often referred to as the “rest and digest” system. This process of your nervous system contributes to the feelings of fatigue after a meal.

Cannabinoids and Orexin: These peptides actually have a counterbalancing system. Low levels of cannabinoids potentiate orexin and can stimulate wakefulness.

Insulin and low potassium: Having increased levels of insulin in the blood stream leads potassium to go into cells, resulting in a low blood serum potassium. Having a decreased potassium level can cause fatigue, muscle weakness, or even paralysis.

How to avoid excessive sleepiness after eating?

Now that we know what may be causing the sleepiness you experience after eating, how can it be avoided? Below are some tips and tricks for preventing that after meal drowsiness.

Avoid high sugar and carbs foods: Foods high in sugars and carbohydrates can leave you feeling drowsy during the digestion process. Skipping them at lunch time will help you beat afternoon fatigue, which leaves you feeling sluggish for the rest of your day.

Be active after eating: Improve digestion and fight the effects of tryptophan by engaging in light exercise after eating, such as walking or doing the dishes.
Take caffeine: A cup of coffee or tea will do in a pinch if you are strapped for time or do not have the means to exercise. The caffeine in these drinks acts as a simulant and can keep you feeling alert.

Take a nap: A 20-30 minute nap after a heavy meal can help you to digest your food and ward off any additional drowsiness.

Use a food diary: Keep track of the foods and habits that leave you feeling sleepy in a food diary, and analyze them after a week to identify trends and factors to avoid.

Eat a healthy breakfast: Eating well at breakfast prevents you from over-doing it at lunch and gorging on fast, unhealthy foods that leave you fatigued after eating.

Eat smart at lunch: Avoid fast food full of sugar, salt and carbohydrates that make you sleepy and opt for more nutritional options to better fuel your body and give you more energy.

Snack: Eating a healthy snack in the afternoon can give you a boost of energy.

Avoid alcohol: Alcohol is a sedative and full of sugars and carbs, meaning it can cause drowsiness quickly. Drink water or sugar-free juices with meals in order to avoid any after-meal fatigue.

Stay hydrated: Drinking eight to 10 glasses of water daily keeps you hydrated and can reduce the feeling of fatigue after eating.

Experiencing fatigue after eating could be due to many things such as other medical conditions, too large portions, meal choice, and even the process of digestion. While it is common, fatigue after eating is not something that must be experienced. Try some of the tips listed to combat tiredness after a meal and make the most of your afternoon.