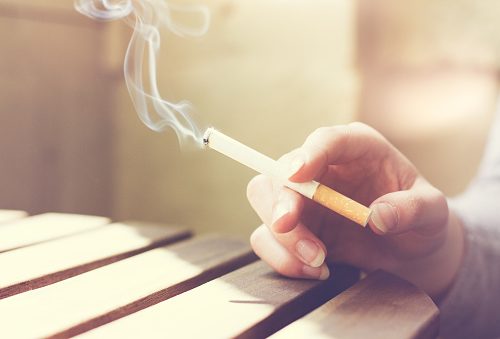 Having bowel issues is never a pleasant experience, but for the most part, they tend to resolve on their own. However, there are people who have constant bowel issues, suffering from a condition called inflammatory bowel disease.

IBD is an autoimmune disease of the gastrointestinal tract and is characterized by chronic inflammation that results in severe diarrhea, pain, fatigue, and weight loss. Two forms of IBD exist: Chron’s disease and ulcerative colitis, both of which have some unique symptoms with some common overlap.

A recent study from researchers in South Korea has found a direct effect of cigarette smoke on the colon, resembling inflammation seen in Crohn’s disease. Additionally, specific white blood cells and inflammatory proteins involved in this effect were identified.

Smoking has always been a risk factor for IBD

Smoking has long been seen as a controllable risk factor for the development of Crohn’s disease. Quitting the habit not only has benefits for your overall health but also is protective against both forms of IBD. However, the mechanism for how this works was not known.

“The airways and the intestinal system have a lot in common. Interestingly, in Traditional Korean Medicine, a connection between the lung and the large intestine has long been emphasized. Crohn’s disease is more likely to occur in people with airway diseases, suggesting that inflammation in the lungs is linked to inflammation in the gut,” says Hyunsu Bae of Kyung Hee University in South Korea.

The study in question involved rodent subjects. Researchers exposed them to smoke and observing its effects on intestinal and lung cells. Mice were exposed to twenty cigarettes a day, six days a week, for a few weeks.


Compared to control mice (not exposed to cigarette smoke), cigarette-exposed mice showed significant inflammation in their lungs as well as colitis-like symptoms resembling Crohn’s disease. Increased levels of mucus and inflammation were found in the colons of these mice as well as trace amounts of blood in their feces.

To make sure their results were accurate, a repeat test was done, but this time on mice who couldn’t produce CD4+. They found that it was cigarettes causing this response, leading to the IBD-like pathology observed.

“Our results suggest that cigarette smoking activates specific white blood cells in the lung, which might later move to the colon, triggering bowel inflammation. Smokers, especially those who also have bowel disease, should reduce their smoking,” explains Jinju Kim, another researcher involved in the study.