Home » Colon And Digestive » Colon Health » What causes a change in bowel habits? 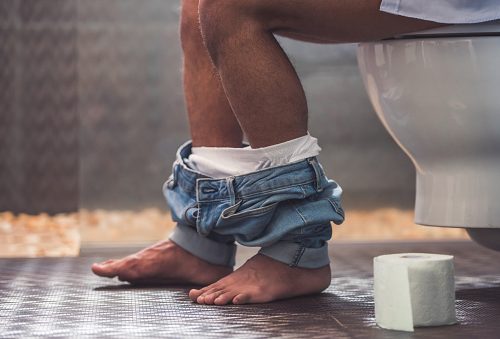 Experiencing a change in bowel habits is a huge inconvenience. We normally have some control over when we choose to go to the bathroom, and our body gives us some time to hold it in before we get there. But sometimes we experience a sudden change in bowel habits that make us desperately search for the nearest toilet, or unfortunately, not make it there in time.

Everyone goes about their basic need to expel waste from the body in their own way, with there being a commonality between them. Having one or two bowel movements on a daily basis is normal, but there are instances where this does not hold true.

In this article, we will discuss what a change in bowel habits mean and how you can recognize subtle changes in your stools.

Often a sign of internal bleeding somewhere along the digestive tract. The color black is a major clue to where the bleeding might have occurred, as blood tends to become darker in color the longer it is out of its normal environment. Knowing this, doctors are confident that the bleeding has originated somewhere in the upper digestive tract, which includes the esophagus, stomach, and first part of the small intestine (duodenum). Bleeding may result from inflammation or an ulcer. Other possible causes of black stool include consuming black licorice, iron pills, medication with bismuth, or blueberries.

Red signifies blood and bleeding somewhere in the digestive tract. Because the blood has not turned to a darker shade, it leads medical professionals to presume the bleeding is somewhere in the lower digestive tract, as the blood has not had enough time outside its normal environment. The lower digestive tract includes the rectum, large bowel, and anus. Causes leading to red stools include diverticulosis and hemorrhoids. Other causes are abnormal blood vessels, intestinal tumors, consuming red food coloring, tomatoes, and beets.

The brown color stool is what most people have become accustomed to when thinking of the waste product. This is the result of various processes controlled by the liver that gives stool its distinctive color and is considered healthy. If the stool were to lose its natural brown color, it often indicates an underlying problem in the liver, gallbladder, or pancreases; all of which contribute to the digestive system. Problems affecting these organs could be due to a tumor, infection, cyst, or gallstone obstruction.

Diarrhea can often present with green colored stool. This is because the bowel is evacuating so quickly that the bile and enzymes normally released to break down your food. It does not have enough time to be used and reabsorbed by the intestinal system. Instead, they are excreted in your stool, giving it a green appearance. Green stools may also be caused by consuming leafy vegetables, iron supplements, or be due to an intestinal condition or infection.

Changes in consistency of bowel habits

The size and shape of your stool can also be a good indicator of possible bowel pathology. The following are some stool presentations and what they could mean.

Depending on how narrow your stools are, it could be just considered a normal variation. However, this stool can sometimes be a sign of irritable bowel syndrome, a condition characterized by the urgent need to defecate with relief achieved once doing so. More worrisome is that having chronically thin stools may indicate an obstruction in the color with colon cancer being a likely possibility.

When stool is dry and rough, it is often described as being a hard stool. Constipation is a common cause of hard stool as it stays in the bowel much longer than normal, allowing the intestines to leech as much water from it as it possibly can, making them harder. Constipation is characterized as passing less than three bowel movements a week.

A common feature of a diarrheal illness, watery stool indicates that its water content is too high and your intestine is not absorbing most of it before it gets released. Disturbances of the digestive tract, as seen with various bacterial and viral infections, can cause watery stools. Diarrhea is defined as having more than three bowel movements per day and having a total volume exceeding 200 grams or 200 milliliters per day.

Floating stool is a characteristic feature of steatorrhea or having excess fat in the stool. There are many issues that can lead to steatorrhea such as malabsorption, lactose intolerance, celiac disease, and cystic fibrosis. This is often used as a clue to doctors to begin investigating a potential underlying cause. Floating stool may also be caused by the gas produced by bacteria and the ingestion of gas producing foods.

Mucus production is a normal process of your digestive tract to aid in easier defecation, however, too much of it can indicate gastrointestinal tract irritation, infection, or inflammation. Too much stool mucus can be a sign of conditions such as Crohn’s disease, cystic fibrosis, ulcerative colitis, and irritable bowel syndrome.

Your digestive tract exists to break down the food you eat in an effort to exact as many nutrients from it as possible. your gut achieved this with the use of bile and other various digestive enzymes. Some foods, such as those high in fiber, are naturally indigestible tend to be excreted out. However, if there is an issue with any part of the digestive process or disorder affecting the production of digestive enzymes, your body will have a hard time breaking down your food resulting in undigested food in the stool.

Changes in frequency of bowel movements

When a person has to go to the bathroom more than they normally do, they are considered to be having frequent bowel movements. However, this is a common sign of diarrhea that may be due to an underlying illness or from a bacterial toxin, as is the case with food poisoning. Frequent bowel movements generally show up alongside cramping, bloating, abdominal discomfort, urgency, and possibly nausea and vomiting.

This could either mean going to the bathroom frequently or infrequently. Irregular bowel movements can also fall into the criteria of diarrhea or constipation.

If you find yourself going to the bathroom more than three times a day (diarrhea) or less than three times a week (constipation), there is generally a reason behind it. There are several disorders that can lead to irregular bowel movements, and their cause is not obvious. The following are some potential causes:

It might be hard to imagine that stool can smell anything but foul, but in fact, it can have subtle nuances that doctors analyze and use as evidence when making a diagnosis. The primary reason stool smells the way it does is because of a large number of bacteria living in your gut. Dietary changes and malabsorption can lead to your stool smelling more than usual, such as in the case of fat malabsorption. Various medications and supplements could also be a likely cause for smelly stool. Various causes of foul smelling stool include:

Due to medications and supplements

Related: What causes foul-smelling stool and how to get rid of it?

How to diagnose and treat the changes in bowel habits

When seeing your doctor about a change in bowel movements, they will first ask you a series of questions relating to the frequency, amount, color, and consistency of your stools. They will also try to pinpoint when the increased bowel symptoms started to help find out other possible causes. Most of the time, a stool sample test will not be needed, but in cases of suspected parasite infection, your doctor may find it necessary for a diagnosis.

Treatment will depend on your cause. The following are some of the remedies employed depending on the type of bowel irregularity.

Related: What your poop (color, smell, and shape) is telling you about your health

How to get rid of smelly gas fast? Smelly flatulence causes and cures