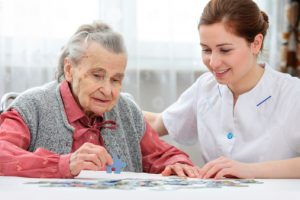 Vascular dementia occurs when part of the brain isn’t getting enough blood carrying the oxygen and nutrients it requires. Some people may assume their loved one has Alzheimer’s, but with Alzheimer’s disease the brain’s nerve cells break down, which is a different situation. Even though these two memory disorders happen in different ways, it is possible to have vascular dementia and Alzheimer’s at the same time.

A person who has vascular dementia generally has problems with planning, reasoning, judgment, and memory. When the vascular dementia risk factors are controlled, it can lessen the progression of Alzheimer’s disease.

There are different types of vascular dementia. While they have some symptoms in common, others differ. As well, the symptoms for each type can progress in different ways.

Stroke dementia: This is dementia that occurs with a stroke. A stroke takes place when blood supply to part of the brain in cut off. Strokes vary in severity depending on where blood vessels are blocked and whether blood supply is interrupted temporarily or is permanent.

Post-stroke dementia: About 20 percent of people who have stroke develop post-stroke dementia within the following six months. If you have a stroke, you are at risk of having another one, and if it does happen, your risk of developing dementia increases.

Single-infarct and multi-infarct dementia: These happen when a person has one or more small strokes. This normally occurs when a clot blocks a medium or large blood vessel. In some cases, the stroke is so small the person doesn’t notice any symptoms. When blood supply is interrupted for more than a few minutes, the stroke will likely result in the death of an area of tissue in the brain – this is called, infarct. If just one infarct forms, then it is single infarct, but if a series of strokes occur over weeks or months, it could lead to multi-infarcts.

Subcortical dementia: This type of dementia is due to diseases in very small blood vessels that are positioned deep in the brain. These vessels become thick, stiff, and twisted, thus reducing the flow of blood through them. Such damage to small vessels can destroy the nerve fibers that transmit signals to the brain. This is the most common type of vascular dementia.

What increases your risk of vascular dementia?

A diagnosis of dementia can be devastating for patient and their family. Sadly, there are few of us today that can say we have not known or heard about someone with dementia.

As people age, many do tend to worry about dementia. Understanding the risk factors can be helpful. For instance, there are some conditions that can damage blood vessels, which can increase your risk of vascular dementia. A person’s risk of developing the condition doubles every five years after the age of 65, so clearly age is a risk factor. Below we list a few other potential risk factors.

History of stroke or heart attack: These events can cut off blood flow to the brain. High blood pressure, smoking, and high cholesterol are also contributors.

Hardened arteries: Cholesterol and plaque deposits in arteries can build up and hinder blood flow, which of course can lead to a stroke or a heart attack.

Contributing conditions: Research suggests that diabetes, lupus, abnormal heart rhythm, being overweight in mid-life, and even sleep apnea could increase the risk of dementia.

Genetics: Some experts believe that common types of vascular dementia may be linked to certain genetic factors. For example, someone with a family history of stroke, heart disease, or diabetes may have an increased risk.

Studies seem to indicate that people from certain ethnic backgrounds are more likely to experience cardiovascular disease and vascular dementia than others. One U.K. study showed that Indian, Bangladeshi, Pakistani, and Sri Lankan individuals tended to have a higher rate of stroke, diabetes, and heart disease than white Europeans. It has been suggested that the difference could be due to lifestyle factors, such as diet and exercise.

When symptoms of dementia start to surface or when a doctor suspects dementia, the patient will undergo a complete physical exam, as well as some memory tests. The discussion with the doctor will also include a review of medical history. In some cases, another family member may need to be present to help fill in the blanks. Oftentimes, brain scans and blood tests are conducted to rule out other ailments and to check the condition of blood vessels.

Treatment for vascular dementia is different for each person, but often involves addressing underlying problems. For instance, if the patient has diabetes, high cholesterol, or high blood pressure, then those conditions are treated. There are some medications that are used to slow the progression of memory-related diseases. However, sometimes, natural treatment is the first course of action for vascular dementia. Options include an exercise routine, a new diet, and a weight loss plan. There are even some symptoms of vascular dementia that can be managed through physiotherapy, occupational therapy, or speech therapy.

Cognitive therapy is another natural treatment. It helps stimulate thinking skills and engages the person who is suffering from dementia. Many people with dementia suffer from anxiety, and cognitive therapy that involves group-based games, emphasizing enjoyment and laughter, can be very helpful to some of these sufferers.

There are other steps that can be taken to help improve quality of life for a person who is struggling with vascular dementia. Family and friends can help by placing notes in visible locations to remind the dementia sufferer about certain plans or instructions. They can remind the person what day it is or talk about what is going on the world. It’s important that those with vascular dementia still feel connected to people and the society they live in.

Unfortunately, there are currently no treatments to stop or reverse the changes that are caused by vascular dementia. On the upside, though, now more research is being conducted than ever before on potential causes and new treatments for this life-altering disease.

Activate the brain: It is recommended by doctors to keep the brain active as soon as the symptoms of vascular dementia are diagnosed. This can involve playing board games, word puzzles, or simply reading books to keep the mind stimulated.

Turn on the music player: Melodic sounds have been proven by many studies to have an effect on the brain. Listening to music can help bring back old memories and also elevate mood.

Antioxidant intake: Known for protecting cells from oxidative damage, helping to decrease brain cell death. Supplements like vitamins and iron are commonly used to achieve this in vascular dementia patients. Antioxidants can also be found in fruits, cocoa, and red wine.

Pull up your socks: Getting a healthy amount of exercise is not only good for your body, but it’s also good for your brain. Studies have shown that regular exercise can even help prevent memory loss in vascular dementia. However, it is advised to speak with your doctor before beginning any rigorous exercise regimen.

Meditation: An often-overlooked practice, but one that can have the most soothing activity in the brain. Routinely making the time to meditate can help boost brain health.

Vascular dementia can be prevented by decreasing or eliminating the various risk factors that may affect you. These include having high blood pressure, high cholesterol, heart disease, smoking, and diabetes. While these conditions may be quite troublesome to manage successfully, many people can help mitigate their negative effects by simply adhering to a healthy lifestyle.