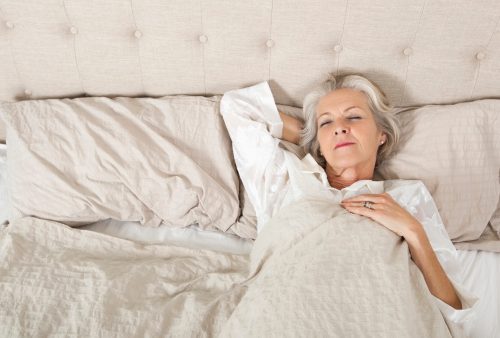 A recent study published by researchers at Stanford University School of Medicine reveals how a drug used to treat urinary incontinence in women can also help reduce their sleep problems.

Urinary incontinence is a condition where a person loses bladder control and urinates involuntarily. It is closely related to urgency incontinence, in which the bladder-wall muscles involuntarily contract suddenly, causing an unstoppable urge to urinate.

When urinary incontinence occurs at night, it disturbs sleep. This condition is more common in old age and affects nearly 30 percent of women between the ages of 30 to 60.

Since both urinary incontinence and poor quality of sleep are being increasingly observed in older people, they seem correlated. In order to study this further, a team of researchers led by Dr. Leslee Subak at the University of California-San Francisco designed a study called BRIDGES (Bringing Simple Urge Incontinence Diagnosis and Treatment to Providers).

A drug called fesoterodine was prescribed to women who experienced urgency incontinence. This drug has been known to decrease accidental urination. Women who were administered thedrug were initially observed for 12 weeks. In order to test whether the drug was actually working, researchers also maintained a placebo group.

They observed that the drug resulted in a decreased urge to urinate during the night, so those who took the drug enjoyed longer hours of uninterrupted sleep.

The Pittsburgh Sleep Quality Index was used to evaluate the sleep quality of participants. It incorporates several parameters such as duration of sleep, day-time sleepiness, and time taken to fall asleep. These are recorded on a scale of 0-3, with a higher score indicating poor quality of sleep. All three scores are added. So, a score of less than five indicates high quality sleep. Based on this index, it was found that around 57 percent of the participants had an average score of 6.4, which indicates that they had poor quality of sleep.

In addition, the frequency of urgency urinary incontinence (UUI) was recorded. This turned out to be an average of 4.6. However, once the participants had taken fesoterodine for 12 weeks, this frequency reduced to 3.9 along with fewer episodes of night-time waking, which improved sleep quality. The women in the placebo group did not experience any improvement.

These findings were published in a paper written by Dr. Subak (now professor and chair of obstetrics and gynecology at Stanford University) and Dr. Qurratul Ann Warsi, former clinical research scholar at the University of California-San Francisco.

The paper outlines the basic premise of their research and concludes that treatment of UUI can improve the quality, duration, and efficiency of sleep.

Implications of this research

The study proves that fesoterodine can reduce not only urgency incontinence, but also night time wakefulness. Therefore, this drug can be used as a treatment to improve sleep quality in aging women. As a result, doctors can prescribe drugs such as fesoterodine as a treatment for more than one problem at a time.

Also read: End of the year round-up: Get the best sleep ever

The dangerous effects of sleeping less than 6 hours