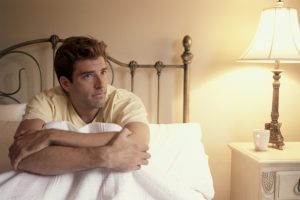 Schizophrenia is associated with reduced sleep spindle and sleep abnormality. Senior author of the study Robert Stickgold explained, “One of the most exciting advances in sleep research over the last decade has been the growing understanding of sleep’s causal relationship to psychiatric disorders. Here, we reviewed the evidence that reduced sleep spindle activity predates the onset of schizophrenia and contributes to its cognitive deficits and other symptoms.”

Sleep spindles are bursts of brain activity lasting for less than a second. They occur during non-REM sleep and have a role in the memory consolidation process. Higher sleep spindle activity is associated with higher sleep-dependent memory processing and a higher IQ.

“While they don’t have schizophrenia themselves, they share half their genes with somebody who does. The question was, would that be enough to show spindle deficits? It was, suggesting that just having some of the genes associated with illness can be enough to cause this spindle deficit,” Stickgold continued.

A previous study identified a gene variant that was strongly associated with schizophrenia. The gene encodes a calcium channel found in high concentration in neurons in the brain area responsible for sleep spindle activity. “We can really draw a straight line all the way from the gene to the disease, like a prosecutor in court. That has never been done before for a psychiatric disorder. It’s exciting in that it offers a whole new dimension of treatment options,” Stickgold explained.

Few studies have attempted to manipulate sleep spindles in schizophrenic patients in hopes to find a new therapeutic target.

Stickgold concluded, “It’s becoming increasingly clear that sleep not only controls memory and emotional processing in all of us, but that deficits in sleep probably contribute to a wide range of psychiatric disorders, including schizophrenia, ADHD, bipolar disorder, PTSD, and depression.”


Tips to help you sleep at night with schizophrenia

Sleep problems are common in schizophrenia patients, but lack of sleep comes along with a higher risk of complications, so it’s important to improve sleep duration and quality in schizophrenia.

Doctors may recommend sleeping tablets or tranquilizers in order to improve sleep in schizophrenic patients. Although effective, these remedies may yield unwanted side effects such as daytime grogginess. Also, patients may become addicted, so these types of sleeping aids must be handled with much caution.

Herbal remedies may also be an option for sleep improvement, but there is little research behind many of them. Furthermore, some of these remedies may interact with medications, so it’s important to speak to your doctor before hand.

One thing is for sure, alcohol should be avoided when trying to sleep. Although it makes you sleepy, you actually don’t get a full night’s rest. Instead, you wake up frequently throughout the night, feeling even more tired in the morning.

You can also promote sleep in schizophrenia by avoiding daytime napping, ensuring the room where you sleep is dark and cool with no distractions, replacing an old, unsupportive mattress, sticking to a sleep routine, avoiding technology use prior to bed, avoiding stimulants prior to bed, avoiding exercise too close to bedtime, and not eating too late.