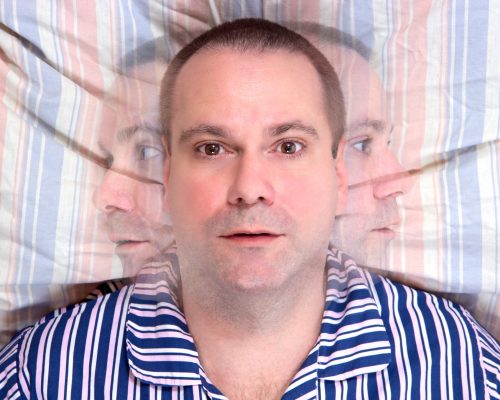 Schizophrenia symptoms are triggered by sleep deprivation and irregular sleep patterns. If a healthy person goes without sleep for 24 hours, this can trigger symptoms similar to schizophrenia. The researchers from the University of Bonn, Germany, and King’s College in London, U.K., suggest that the findings should be examined further, especially for those who work during the night.

During psychosis, there is a loss of reality, which is associated with hallucinations and delusions. The chronic version of this is known as schizophrenia, which is also associated with the hearing of voices in one’s head. Professor Dr. Ulrich Ettinger said, “”It was clear to us that a sleepless night leads to impairment in the ability to concentrate. But we were surprised at how pronounced and how wide the spectrum of schizophrenia-like symptoms was.”

The researchers looked at 24 healthy patients in a sleep laboratory. For the initial test, participants slept normally for a week. After that initial week, they were kept awake all night with movies, conversations, games, and brief walks. The following morning participants were asked about their feelings and thoughts, and underwent a measurement known as prepulse inhibition.

Lead author Dr. Nadine Petrovsky explained, “Prepulse inhibition is a standard test to measure the filtering function of the brain.” During the experiment, a loud noise is heard through headphones, making the participants startled, and the reaction is measured through electrodes. “The prepulse inhibition demonstrates an important function of the brain: Filters separate what is important from what is not important, and prevent sensory overload,” Dr. Petrovsky added.

Professor Ettinger continued, “There were pronounced attention deficits, such as what typically occurs in the case of schizophrenia. The unselected flood of information led to chaos in the brain.” The participants also answered questionnaires about their sensitivity to light, color, and brightness. According to their responses, their sense of time and smell was altered. A psychologist from the University of Bonn said, “We did not expect that the symptoms could be so pronounced after one night spent awake.”

“In drug development, mental disorders like these have been simulated to date in experiments using certain active substances. However, these convey the symptoms of psychoses in only a very limited manner,” said Professor Ettinger. Sleep deprivation may be an effective model to help measure disorders similar to mental disorders, and this is a safe model as it is easily restored through sleep.

Previous studies have also shown that poor and irregular sleep patterns can trigger schizophrenia symptoms. The findings came from researchers at the University of Bristol, the Lilly Centre for Cognitive Neuroscience, who recorded electrical brain activity in multiple brain regions during sleep.

One of the researchers, Dr. Ullrich Bartsch said, “Sleep disturbances are well-documented in the disease, though often regarded as side effects and poorly understood in terms of their potential to actually trigger its symptoms.”

The researchers used rat models, and their recordings revealed desynchronization of the activity waves, which normally travel from the front to the back of the brain during deep sleep. Specifically, the flow through the hippocampus appeared to be disrupted.

Lead researcher Dr. Matt Jones said, “Decoupling of brain regions involved in memory formation and decision-making during wakefulness [is] already implicated in schizophrenia, but decoupling during sleep provides a new mechanistic explanation for the cognitive deficits observed in both the animal model and patients: sleep disturbances might be a cause, not just a consequence of schizophrenia. In fact, abnormal sleep patterns may trigger abnormal brain activity in a range of conditions.”