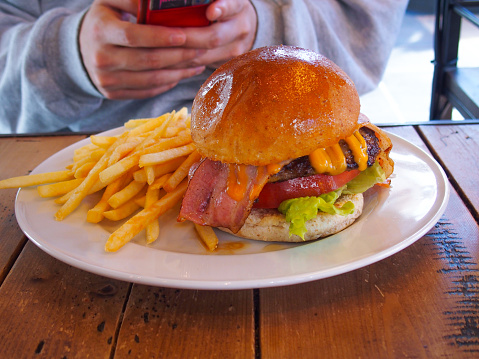 It’s pretty obvious why you shouldn’t consume too much fat in your diet. It can lead to weight gain along with other health problems. The latest study findings uncover another reason to steer clear of dietary fat, especially if you’re a male with prostate cancer.

The typical Western diet is high in fat, so the researchers explored the role of this dietary fat, along with genetics, in the progression of prostate cancer. Dr. Pier Paolo Pandolfi, director at the Cancer Center and Cancer Research Institute in Massachusetts, explained that the findings “are tremendously actionable, and they surely will convince you to change your lifestyle.”

It has been widely speculated that the typical Western diet could promote prostate cancer progression, but there was a lack of direct evidence. This is what inspired the research.

It is known that the PTEN gene—a tumor-suppressing gene—plays a key role in cancer progression because in animal studies, when this gene is absent, cancer spreads. On the other hand, studies have shown that loss of this gene is not enough to trigger the spread of cancer on its own.


Dr. Pnadolfi explained, “It was as though we’d found the tumors’ lipogenic, or fat production, switch. The implication is, if there’s a switch, maybe there’s a drug with which we can block this switch and maybe we can prevent metastasis or even cure metastatic prostate cancer.”

The researchers found that when mice—who were fed fruits and vegetables—were given an obesity-blocking drug, the tumors regressed and did not spread. These mice were then fed a diet similar to that of the Western diet and the researchers found that the tumors spread, even when taking the obesity-blocking drug. This reveals that a high-fat diet is a large contributing factor in the spread of prostate cancer.

Dr. Pandolfi concluded, “The progression of cancer to the metastatic stage represents a pivotal event that influences patient outcomes and the therapeutic options available to patients. Our data provide a strong genetic foundation for the mechanisms underlying metastatic progression, and we also demonstrated how environmental factors can boost these mechanisms to promote progression from primary to advanced metastatic cancer.”

Related: Short-term exposure to western diets can lead to diabetes and cardiovascular disease