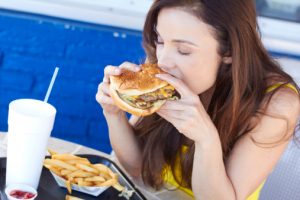 Living in a great country like the United States comes with many comforts. Nowhere is this more beneficial than in our access to food. We can go to the grocery store, a nice restaurant, or even just order a pizza over the phone. But unfortunately, this means that many Americans indulge too much, often consuming what has been dubbed the western diet.

While society has been seeing a trend toward healthy food and lifestyles, a new study suggests that even short-term exposure to the average American diet increases the risk of developing diabetes and cardiovascular disease.

A western diet often consists of a higher intake of red and processed meats, loads of sugar, high-fat dairy products, and other high calorie refined products. Not only do these types of foods have low nutritional value, they are partly to blame for the obesity crisis that is currently plaguing American citizens.

A recent study conducted by researchers from the New York Institute of Technology College of Osteopathic Medicine (NYITCOM) has proven that a western diet can lead to long-term, often life-threatening disease in both males and females.

Using rats to test their hypothesis

What surprised the researchers more was the female rats also showed blood vessel damage at this early stage. It is well known that female hormones, such as estrogen, are somewhat protective against this phenomenon, as women are less likely to suffer from cardiovascular-related condition early in life.


More distressing is that these female rats did not appear to be obese from their outward appearance, despite having vascular damage and increased blood pressure. Typical warning signs of diabetes were also not appreciated, such as increases in blood glucose level or hemoglobin A1c.

“Our findings suggest that short-term exposure to the western diet can put individuals at risk for developing vascular damage long before the tell-tale signs of diabetes are present. This may explain why some diabetics who successfully manage their blood glucose still experience other cardiovascular diseases, like hypertension, even while receiving treatment,” said Carrillo-Sepulveda who contributed to the study.

Calling for all medical professionals to look deeper

The researchers want physicians to not only look for biomarkers signaling disease, but also take into account the patient’s cultural environment in order to provide better treatment.

“Translating the study results to potential patients, the problem is the food our patients are eating. If we can educate and encourage them to make better food choices, we can play a key role in the prevention of the development of diabetes,” said Benjamin Kramer, a fourth-year medical student who also worked on the study.