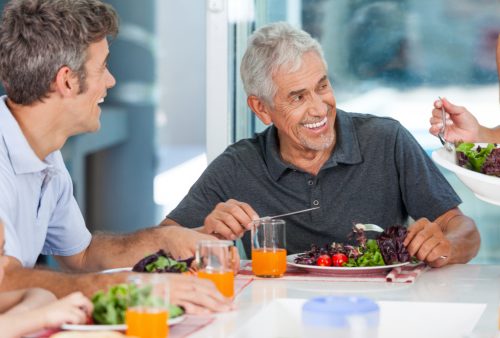 The food we eat not only provides us with the energy we need throughout the day, but also dictates our overall health. Those who eat fast food for the majority of their meals are likely to have high cholesterol, high blood pressure, and be overweight. Those who adhere to a diet comprised of healthy foods, such as lean meats and vegetables, are more likely to not have these health issues.

According to a new study, those who eat the foods included in two healthy diets, the Mediterranean and the MIND diet, were not only healthier but were at a lower risk of developing memory problems as older adults.

Diets for the body and mind

The Mediterranean diet is primarily composed of plant-based foods such as fruits and vegetables, whole grains, legumes, and nuts. It also emphasizes the replacement of many commonly used western food staples. For example, butter is replaced with olive oil, herbs and spices are used instead of salt to flavor food, and fish and poultry is chosen over red meat.

The MIND diet is a combination of the Mediterranean and DASH diets and stands for Mediterranean-DASH Intervention for Neurodegenerative Delay. It was developed to help lower the risk of Alzheimer’s disease by promoting brain healthy foods.

The MIND diet consists of eating 10 types of food daily and avoiding five types of foods. Healthy foods are consumed based on an outlined diet plan. Foods delineated by the MIND diet include:

Assessing the diets and cognitive ability of older adults

The study in question led the researchers to examine the information from nearly 6,000 adults, all of which filled out questionnaires about their eating habits. Next, their memory and attention skills were assessed.

It was also discovered that eating a Mediterranean-style diet carried with it a 35 percent lower risk of scoring poorly on these cognitive tests. Even those who moderately adhered to this diet saw a 15 percent less risk. Similar results were observed with those on MIND-style diets as well.

Eating a healthy diet has also been known for keeping the body running in the best shape possible and extending longevity. The researchers also mentioned that it’s never too late to start these diets.