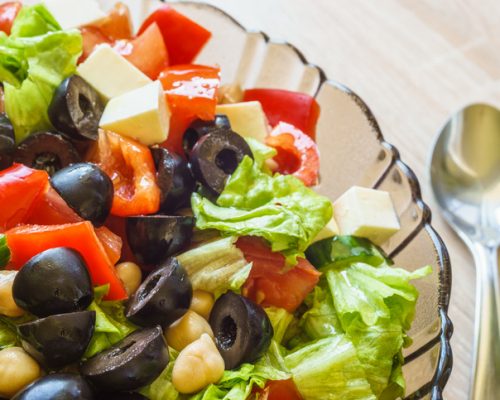 Mediterranean diet may decrease heart disease risk by lowering post-meal blood triglyceride levels (PPL). High PPL is a known risk factor for cardiovascular events. The findings are supported by an extensive research review involving studies dating as far back as 1957 on the links between food and heart disease. The review results are published in The American Journal of Medicine.

The researchers found that elevated cholesterol levels are associated with a high intake of saturated fat, increasing the risk of coronary heart disease.

By now we know the importance of keeping the cholesterol levels down, and the American Heart Association recommends consuming less than 30 percent of daily calories from fat and less than 10 percent from saturated fat – commonly found in red meat and dairy.

While it was a common knowledge that a low-fat diet was optimal for heart health, the researchers also believed that a holistic approach to eating, as seen in the Mediterranean diet, may be a viable option for reducing heart disease risk as well.

The scientists extensively reviewed existing research on the Mediterranean diet and highlighted the aspects that can contribute to an improved cardiovascular health.

The researchers wrote, “It seems that most components of the Mediterranean lifestyle may reduce PPL, an important CVD [cardiovascular disease] risk factor, with the exception of wine. Although olive oil is a main component of this pattern, preliminary results of studies of several other components — such as fish, legumes, herbs, and physical activity — are very promising. Studies are needed in order to investigate whether the effect of the Mediterranean lifestyle and its components on PPL mediate the overall well-established protective role of this lifestyle.”


Effect of food on triglyceride levels

Triglycerides are fats found in the blood and in the food we eat. Normal triglyceride levels are defined as less than 150 mg/dL. Between 150 and 199 is considered borderline high, 200 to 499 is high, while 500 or higher is officially deemed very high.

When triglyceride levels are high, blood becomes thicker and stickier, which means it is more likely to form blood clots.

Triglyceride levels can often spike after consuming a meal high in carbohydrates or after drinking alcohol. If your triglyceride levels are already high, you should avoid sugary foods and beverages, honey, and other sweeteners, as well as baked goods or anything made with refined flour. You’ll also want to limit your intake of dried fruit and fruit juices, since they tend to be loaded with simple sugars.

Simple lifestyle changes can help you lower your triglyceride levels. These include losing weight if you’re overweight, reducing saturated fat in your diet, eliminating trans fat, avoiding foods that contain concentrated sugar, swapping out refined carbohydrates with whole grains, cutting back on your alcohol intake, incorporating more omega-3s into your diet, quitting smoking, and increasing your physical activity.