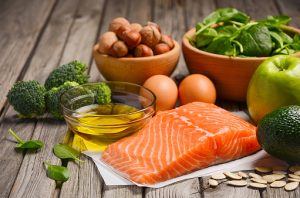 Eating right should be a priority for everyone. A healthy diet provides you with the nutrients you need and limits the amount of processed ingredients that linger in your body. Healthy eating is often viewed as a way to manage weight, but according to a new study, it can also help prevent dementia.

Dementia is a long-term memory disorder. It can also manifest as personality changes and impaired reasoning. The most common cause of dementia in old age is Alzheimer’s disease.

According to four new studies, eating right may protect brain health as you age. In particular, the Mediterranean-DASH Intervention for Neurodegenerative Delay (MIND) diet helped to lower people’s risk for declining brain function by 35 percent as they got older. Those who only partially followed the diet saw a reduced brain decline between 18 to 24 percent.

“We’ve always been saying that a healthy heart is a healthy brain. Your brain uses 20 percent of your cardiac output for getting oxygen and glucose. If you don’t have a good pump, that saps the brain of a lot of things needed to sustain its normal function.” said Dean Hartley, director of science initiatives for the Alzheimer’s Association.

As you get older, your risk for high blood pressure, increased cholesterol, and strokes increase substantially, all of which contribute to poor health and mental outcomes. The DASH diet intends to reduce these risks.

The DASH diet consists of foods that are lower in saturated fat, total fat, and cholesterol. It also has lots of fruit, vegetables, low-fat dairy, whole grains, poultry, and nuts. Additionally, it is recommended to limit intake of red meats, sugar, and salt. Substitutions are also part of the DASH diet, as butter is often replaced with olive oil.
The study in question involved approximately 6,000 seniors who adhered to the MIND diet the best they could. Differences in brain function tests were seen in those who stuck closely to the guidelines of the diet and those who didn’t.

Another study involving more than 7,000 women who were followed for about 10 years found that those who closely adhered to the MIND diet were 34 percent less likely to develop Alzheimer’s disease, compared to women not following the diet at all. Women who only moderately followed the diet saw between 21 and 24 percent decrease in Alzheimer’s risk.

The researchers of both studies say that it is likely that people who eat a healthy diet take care of themselves in other ways. This gives them the best chance of not only decreasing their risk for memory disorders, but also helps them live longer, healthier lives.

Related: 10 power foods for your brain