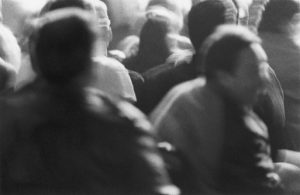 Oscillopsia refers to a visual disturbance where those affected experience swinging or oscillating vision. Patients often report that objects on the horizon of their eye vision move back and forth as well as up and down, making it difficult to effectively capture and recognize an object. Patients also describe having blurred or double vision. Many of these symptoms are reported when the patient is moving, walking, running, or even simply riding in a car.

Oscillopsia is an incapacitating and distressing condition and is believed to be a result of an underlying neurological dysfunction of the oculomotor system.

There are several muscles involved in normal eye movements, which can be affected by abnormalities of the central nervous system. The loss of image stabilization during head movements is believed to be a major cause of oscillopsia. Essentially, oscillopsia develops when the retina image is unstable because the eye is either moving too much or not enough.

Oscillopsia causes may stem from a condition called nystagmus, a vision condition where the eyes make repetitive and uncontrolled movements. Nystagmus often results in reduced vision and depth perception, affecting balance and coordination. Upon direct inspection of the eye, they often appear to involuntarily move side to side and up and down, or in a circular motion. Nystagmus may appear in conditions such as multiple sclerosis or toxin exposure.

Another potential cause of oscillopsia is the loss of vestibular-ocular reflex (VOR). In this condition, the normal rotation of the head and its corresponding eye movement does not occur. This leads unstable images to be projected on the back of the retina, causing images to appear as they are oscillating.

The most commonly presented symptom of oscillopsia is the unstable nature of objects in the field of vision. This uncontrolled movement of what we are looking at can lead to serious effects including nausea, dizziness, and vertigo. Patients may also experience fuzzy or blurred vision.

Double vision may also be a feature of oscillopsia, with its presence providing an important clue to the possible origins of the condition. Having double vision strongly suggests a vestibular disorder, which could stem from issues with the inner ear that aids in balance and eye movement.

Diagnosis and complications of oscillopsia

An oscillopsia diagnosis will depend on the description outlined by the patient, making it quite tricky to identify right way. This is primarily due to each person having their own unique account of their symptoms. Questions narrowing down the diagnosis of oscillopsia often include: “is your vision moving, oscillating, jumping, or wobbly?” as well as “are these symptoms occurring in both eyes or just one?”

Additional questions that point to a diagnosis of oscillopsia include:

Depending on your answers, the cause for your particular case of oscillopsia may fall into the following categories:

Symptoms triggered by movements of the head:

Symptoms at rest (not significantly associated to movement) Paroxysmal:

Patients affected by oscillopsia often suffer from a profound sense of loss of balance every time they move their head. This can make it very difficult to perform everyday tasks. Those with severe oscillopsia are usually unable to drive.

Over time, most patients with oscillopsia will begin to compensate for their symptoms, however, others may remain permanently disabled. Unfortunately, pharmaceutical drugs have little to offer in ways of curing the condition, but they may help in rare circumstances. Patients are encouraged to resume activities, especially walking, as well as to enroll in exercise programs.

Those who lack VOR often have an easier time suppressing vestibular eye movements. That suggests that a head-fixed video display may be able to compensate for head perturbations in patients with lost vestibular function. However, technology has not reached this point in oscillopsia treatment.