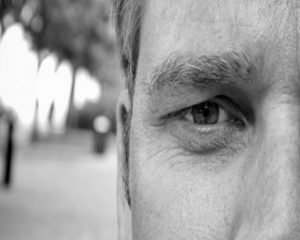 Palinopsia is defined as the persistent recurrence of a visual image after the stimulus has been removed. It is often described as having an after-image of an object, reappearing briefly after it has been removed from attention. The condition is distracting and irritating, but fleeting as the image in the visual field lasts just for a few seconds in most cases.

While data on the number of people affected by palinopsia is limited, it is estimated that up to 10 percent of migraine headache sufferers show symptoms of the condition. This is especially true in patients who have a migraine with aura. It is not certain whether palinopsia occurs more frequently in men or women, but there is a correlation between women and an increased frequency of migraine headaches.

What are the types of palinopsia?

Illusionary palinopsia is a visual illusion or altered perception of a real external stimulus. An example of this phenomenon can be appreciated when looking at a bright computer screen, then looking away and seeing an indiscreet after-image for several minutes in the same visual field location. It is this distortion in shape, size, or color that produces an illusion distract from the actual stimulus.

Illusionary palinopsia can occur in migraine sufferers, after hallucinogen use, or be a side effect of prescription drug use, such as when using trazodone, clomiphene, oral contraceptives, or topiramate.

Hallucinatory palinopsia is the manifestation of an image where none previously existed. They are similar to complex hallucinations such as seeing objects, animals, or people that don’t exist. An example of this this: after seeing a cat, an almost identical cat remains fixed in the field of view. This may last for a few seconds or even a few hours in some cases. Hallucinatory palinopsia can also be referred to when an object or physical feature is superimposed on another object or person. For example, this may come in the form of seeing a man with a beard then seeing the same beard on every other person you see or seeing a distinctive shoe then seeing that type of shoe on every other person.

Hallucinatory palinopsia is usually due to seizures or posterior cortical lesions such as infarction, abscesses, and neoplasms of the brain.

There are two recognized forms of an abnormal persistence of visual images in time, either being the immediate or a delayed type. The immediate type is characterized by an image persisting immediately after the disappearance of the actual scene or object, usually fading after a period of time. This form is similar to physiological after-images. The delayed type is seeing an image of a previously seen object minutes to hours after the object has been out of view.

This can persist for days or week. It has been known that some patients can present with both immediate and delayed forms of palinopsia.

Palinopsia can simply appear on its own, however, in most cases, it is accompanied by other visual disturbances, such as visual snow. It is believed that much of the reason why people develop palinopsia is due to conditions that affect the brain in the visual processing centers of the occipital lobe. These conditions may include tumors, visual pathway lesions, occipital lobe injury, or even certain medication use. However, palinopsia may also sometimes present in healthy individuals.

Knowing what palinopsia symptoms to look out for can help you self-diagnosis the condition. Because the condition can only be described by personal observation, an eye specialist will only ask you what you see and how you see it, to come to a diagnosis of palinopsia. The following are the most commonly observed symptoms of palinopsia:

History: Helps to determine between hallucinatory or illusionary palinopsia, which will aid in the treatment planning. A history will often encompass all previously diagnosed medical and psychiatric conditions, as well as a list of all currently used medication. Specific lines of inquiry will be done to probe for potential causes for illusionary or hallucinatory palinopsia, such a looking for signs of seizure or mental health disorders.

Physical examination: Most causes of palinopsia will not find any signs of the condition during a physical examination. However, if there is a prominent condition that has led to the palinopsia, such as the visual appearance of a hallucinogen drug user or a symptom of a previously inflicted brain infarct, these may be noted.

Clinical diagnosis: Most cases of palinopsia are benign and idiopathic (having an unknown cause). However, hallucinatory palinopsia may be indicative of a more severe disease than its illusionary counterpart but is less common.

Diagnostic procedures: Hallucinatory palinopsia will often include a full ophthalmologic and neurologic history and physical exam. Automated visual field testing, as well as neuroimaging. This is because the hallucinatory type may be associated with serious neurological complications. While these tests may be useful in the illusionary type, they are not the ideal tests for investigating migraines.

Laboratory test: This will often induce the use of neuroimaging studies such as MRI for hallucinatory palinopsia.


Treatment and prognosis of palinopsia

Transient cases of palinopsia, not caused by an underlying condition, typically do not require any treatment as they resolve on their own. However, despite not being an emergency condition requiring prompt intervention should still be evaluated by a medical professional especially if symptoms persist.

In cases of hallucinatory palinopsia, treatment for its various underlying causes, such as seizure, will usually lead to a resolution. For illusionary palinopsia, medications that decrease the excitability of neurons, such as clonidine, gabapentin, acetazolamide, magnesium, or calcium channel blockers, may help resolve the condition, but more research is needed to be done on its effectiveness. Cases caused my migraine headaches would find benefit from migraine treatment.

The use of sunglasses or other tinted-lens eye wear may also help alleviate illusionary palinopsia symptoms.

While it is hard to say how long the symptoms of palinopsia last, most experts consider the condition to be a rare transient phase that would either resolve on its own or progress to a visual field defect that may last days to months. Treatment of the condition will depend on how treatable the underlying condition is, with some patients not responding at all.

Blurred vision in one eye: Causes, symptoms, and home remedies