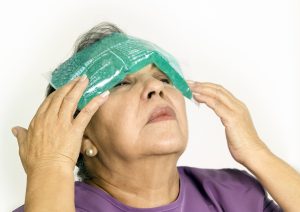 The study followed thousands of women who were not using hormonal replacement therapy for eight years. Baseline bone mineral density measurements were taken for 4,867 women out of 23,573 participants.

Coauthor Jean Wactawski-Wende explained, “We knew that during menopause, about 60 percent of women experience vasomotor symptoms (VMS), such as hot flashes and night sweats. They are among the most bothersome symptoms of menopause and can last for many years. It also was known that osteoporosis, a condition in which bones become structurally weak and more likely to break, afflicts 30 percent of all postmenopausal women in the United States and Europe, and that at least 40 percent of that group will sustain one or more fragility fractures in their remaining lifetime. What we did not know as whether VMS are associated with reductions in bone mineral density or increased fracture incidence.”

“Women who experience vasomotor menopausal symptoms will lose bone density at a faster rate and nearly double their risk of hip fracture, and the serious public health risk this poses is underscored by previous research that found an initial fracture poses an 86 percent risk for a second new fracture. Clearly, more research is needed to understand the relationship between menopausal symptoms and bone health. In the meantime, women at risk of fracture may want to engage in behaviors that protect their bones including increasing their physical activity and ensuring they have adequate intakes of calcium and vitamin D,” Wactawski-Wende concluded.


Link between osteoporosis and menopause

Osteoporosis is most commonly seen in women over the age of 50. This very much coincides with the time women enter or are finishing menopause. The link between menopause and osteoporosis is quite simple – it all comes down to estrogen.

Aside from a drop in estrogen, there are other factors that play a role in a woman’s risk of developing osteoporosis. For starters, the amount of bone a woman has by the time she reaches menopause plays a role, along with the rate of bone loss that occurs after menopause – for some women, this can be a slow process, while others lose bone quickly.

For some women, it is beneficial to undergo hormone replacement therapy, which not only aids in menopause symptoms but can also offer greater protection against bone loss resulting from the declining levels of estrogen.

Even though you may think being a woman automatically signs you up to develop osteoporosis, this is not always the case. There are strategies to help lower your risk of osteoporosis, which include eating a calcium-rich diet, getting in adequate vitamin D, exercising regularly, minimizing your caffeine and alcohol intake, and not smoking.