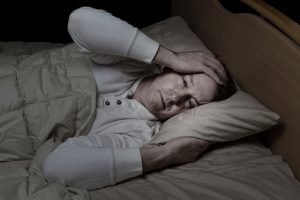 Sleep hyperhidrosis, or night sweats as it is commonly called, is a condition characterized by excessive sweating during the night. Normally, if the bedroom is unusually hot or if the bedclothes are not appropriate for the season, one may begin to sweat during sleep. That’s different. People with sleep hyperhidrosis will typically wake up at night to find their bedclothes and bedding drenched, even if their bedroom temperature is cool. This abnormal sweating is annoying, but usually harmless.

It’s important to distinguish environment-induced night sweating from the night sweats that arise from medical causes. Doctors generally come to a diagnosis of sleep hyperhidrosis only if the patient has hot flashes at night that result in severe night sweats and drenched sleepwear and sheets, given that the sleeping environment is not overheated. Night sweats are more common in women, but men are prone to this irritating and sleep-disturbing condition, too, though the causes for the condition may differ in men and women.

There are various causes that can lead to night sweats. A detailed medical history is vital in pinpointing the cause of night sweats, and various diagnostic tests can confirm the medical condition responsible for the night sweats. Some of the more common conditions that can result in night sweats are:

Menopause. This is a one of the most common cause of night sweats in women. The hot flashes that accompany this stage in a woman’s life can occur at night and cause excessive sweating.

Idiopathic hyperhidrosis. This is a condition in which the body chronically produces too much sweat without any identifiable medical cause. Trust the medical professionals to hide behind a fancy name, when they don’t have a clue.

Gastro-esophageal reflux disease (GERD). Though this condition in which the stomach acid leaks out of the stomach and into the gullet causes night sweats in some patients, GERD is not a very common cause of night sweats.

Hormone disorders. Conditions like pheochromocytoma, carcinoid syndrome, hyperthyroidism, and other hormone-related disorder can cause night sweats.

Obstructive sleep apnea (OSA). OSA is most commonly seen in middle-aged men who are obese or overweight. Statistics show that as many as four in 100 middle-aged men and two in 100 middle-aged women develop OSA. People with OSA may not be aware that they have this problem, as they do not usually remember the waking times at night. But in some cases people with OSA find that they get night sweats and even an urge to get up to pass urine frequently during the night.

Alcohol abuse or drug misuse. Both these conditions can result in OSA and the associated night sweats (see above).

Cancers. In some cancers, night sweats are an early symptom of cancer. In fact, in some cases, especially when they occur along with other symptoms like unexplained weight loss and fevers, night sweats can lead to early diagnosis of cancer.  Lymphoma is one of the commonest types of cancers associated with night sweats.


Causes of night sweats in men

Except for menopause, all men can get night sweats from any of the above causes. But in addition to the above, there is another important factor that can cause night sweats in men.

Low testosterone.  According to the Mayo Clinic, men with very low levels of testosterone may experience night sweats. It’s common knowledge that as a man begins to age, his levels of testosterone will decrease gradually until he begins to experience the symptoms of andropause, which is basically the male equivalent of menopause. However, testosterone levels also drop in men who undergo hormone therapy to treat prostate cancer. Whatever the cause of the drop in testosterone levels is, the common result is night sweats. As with menopause, night sweats are just one of the many symptoms that come along with andropause. In fact, many men choose to undergo hormone therapy procedures just to get relief from these irritating night drenching episodes.

Causes of night sweats in women

While menopause is the overriding reason for night sweats in women, care must be taken to rule out any of the other medical causes listed above.  Only when all the other causes are ruled out should we think of menopause. During cessation of the monthly periods, the woman’s body experiences a sea of changes led by a fluctuation of estrogen levels. This fluctuation creates a sort of confusion in the hypothalamus (the body’s master gland), which is responsible for regulation of body temperature, among other things.

Though night sweats (sleep hyperhidrosis) are not life-threatening per se, they can be dangerous or harmful. The thing is, night sweat can cause a person to miss out on quality sleep and to remain distracted and fatigued during the days. As this can lead to serious health conditions (depression, stress, and even fractures caused by accidents, like dozing off behind the wheel), it is important to find out the root cause of the night sweats and nip the problem in the bud.