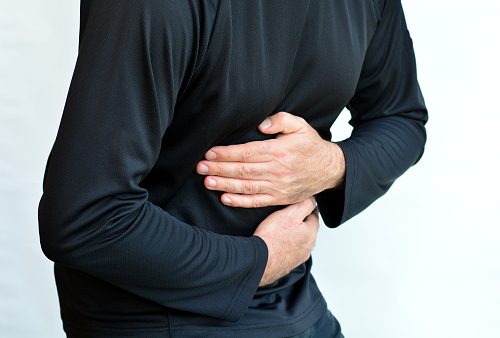 What is gallbladder pain?

Gallbladder pain is a term used to describe pain originating from the structures in or around the gallbladder that affects its function. This may include conditions such as biliary colic, cholecystitis, gallstones, pancreatitis, and ascending cholangitis.

The gallbladder is a structure connected to the liver, which supplies it with bile—a yellowish-brown fluid that aids in the digestion of fats in the small intestine. Whenever we consume a fatty meal, the gallbladder contracts to excrete bile into the digestive tract. If a condition such as the ones mentioned above prevents the gallbladder from doing its job, it can lead to gallbladder pain.

Anatomy of the gallbladder

The gallbladder is a hollow structure located on the right side of the body, just under the liver. Its function is to store bile fluid received by the liver, serving as a reservoir for unused bile. When food is eaten, a hormone called cholecystokinin is released, which signals the gallbladder to contract and secrete bile via the common bile duct into the small intestine. Additionally, wastes produced by the liver can also be expelled this way.

The gallbladder wall is composed of an absorbent lining which further concentrates the stored bile. Having an excess of cholesterol, bilirubin, or bile salts can lead to the formation of gallbladder stones.

If small in size, a gallstone will not cause much of an issue. But if they reach a certain size, gallstones can obstruct the bile ducts, causing pain.

Also known as biliary calculi, these stones form due to imbalances in the level of cholesterol in the body. However, they may also form if the gallbladder does not empty efficiently.

Gallstones may range in size from one millimeter to several millimeters, and they usually do not cause any problems until big enough to block the bile ducts, which leads to pain. Symptoms of gallstones often present as severe abdominal pain, jaundice (yellowing of the skin and eyes), and fever.

There are several types of gallstones, and these may include:

In most cases, inflammation of the gallbladder is caused by gallstones blocking the ducts that exit the gallbladder itself. Other potential causes of cholecystitis include bile duct problems and tumors leading to obstruction of bile flow.

The foods you eat are directly related to the development of gallbladder pain, creating a sort of sensitivity to particular food groups. These foods may include fatty meats, eggs, dairy products, and highly acidic fruits. Other pre-existing medical conditions, such as liver disease, may also trigger gallbladder pain.

Pain is often experienced as sudden and rapidly increasing in the upper-right abdomen, but it may also spread to other parts of the abdominal area. Biliary colic can occur at any time. It typically lasts anywhere from one to five hours but may last only a couple of minutes for some individuals.

The consumption of fatty food is a common trigger of biliary colic, and it is often accompanied by nausea and vomiting.

Inflammation of the gallbladder that develops over hours and usually due to a gallstone obstructing the cystic duct. Pain is generally severe and steady and lasts longer than biliary colic. The abdomen may feel tender to the touch or if pressed down and may be exacerbated by moving or coughing.

While a gallstone causing obstruction is the likely cause of this condition, acute cholecystitis can also be caused by complications of trauma known as acalculous cholecystitis.

A condition due to sudden inflammation of the pancreas, which is an organ involved in producing digestive enzymes. It is connected to the gallbladder via the common bile duct.

Acute pancreatitis can lead to severe abdominal pain that is typically felt below the ribs and can build up over days. Pancreatic pain can also be felt in the back and is associated with nausea and vomiting.

Due to an infection of the bile duct and usually caused by bacteria that has ascended from the small intestine.
Common symptoms of this condition include right upper quadrant pain, fever, and jaundice. If mental status changes and signs of sepsis are observed, this is considered an emergency situation requiring immediate medical attention.

Women: Considered more likely to develop gallstones leading to gallbladder pain as pregnancy and hormone replacement (utilized by postmenopausal women) could lead to their increased development.
Certain medical conditions in children: Having a spinal cord injury, history of abdominal surgery, compromised immune system, and receiving IV nutrition has been seen to put children at risk for developing gallstones.

Certain nationalities: The Hispanic and Northern European populations are considered at greater risk of developing gallstones than Asian and African populations. Those living in North or South America, especially the native women population in Chile and Peru, are thought to be especially vulnerable to develop gallstones.

Family history: It has been shown that heredity plays a role in gallstone development.

Metabolic disorders: Those who suffer from diabetes and obesity have a high risk of developing gallstones and therefore gallbladder pain.

How to diagnose gallbladder pain?

How to treat gallbladder pain

When experiencing intense abdominal pain, it is a good idea to seek medical attention as soon as possible to make sure it isn’t due to a life-threatening complication. However, know that if you suffer from relatively benign gallbladder pain, you may try some home remedies to help ease the pain. These include:

If you experience symptoms despite all your efforts, going to the emergency room is a wise choice. If you choose not to seek professional care, you may experience the eventual complications of gallbladder pain. These include discomfort while eating, weight loss, electrolyte abnormalities, and a decrease in quality of life.