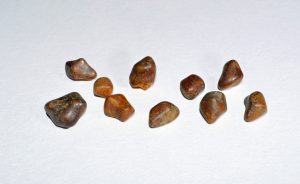 Gallstones affect approximately 20 percent of women over 40 and eight percent of men. They can contribute to infection, which needs to be treated with antibiotics, but natural treatments can be effective in managing gallstones too.

Below you will find some natural treatment options for gallstones to help you relieve the symptoms and speed up the recovery.

There are a variety of natural treatments for gallstones that you can try to relieve symptoms and help break down gallstones.

Gallbladder cleanses: Conducting a gallbladder cleanse can help break down gallstones and flush out excess bile, which can contribute to gallstones. Although your body is intended to perform its own cleanses, there are things you can do to assist. For example, some people consume a mixture of olive oil, juice, and herbs for a few days. This isn’t recommended for people with diabetes or other health issues as it can be dangerous to live off this mixture. Always speak to your doctor prior to beginning any cleanse.

Yoga: In one study, yoga was found to improve lipid profiles among diabetics. With lipids being a contributing factor to gallstones, improving them is a good prevention method. There is currently no scientific evidence to support that yoga can help remove gallstones, but it may help improve symptoms and it’s a good exercise to perform for overall health.

Castor oil pack: This method is often used instead of a gallbladder cleanse. A warm cloth is soaked in castor oil and is then placed on the abdomen. There is no scientific evidence to support that this method can aid in gallstones, but it doesn’t hurt to try.

Acupuncture: Several studies have looked at acupuncture as a treatment to reduce pain. There are small studies that show acupuncture may relieve gallstone symptoms and volume, but additional research is needed. It’s important that you see a registered acupuncturist that is aware of the proper technique.

Diet can play a role in the development of gallstones. For example, a diet high in calories and refined carbohydrates and low in fiber can contribute to the condition.
Here are some home remedies and diet tips you can use to help treat gallstones.

Foods to Eat for Gallstones

Foods to Avoid for Gallstones

Dandelion: Historically, dandelion has been used for the treatment of bile duct problems. The bitter root may stimulate bile production in the gallbladder. You can drink dandelion tea, eat the greens in a salad, or have it with your coffee.

Lysimachia herb: Also known as gold coin grass, this herb is popular in Chinese medicine as a remedy for gallstones. It has been shown to help with cholesterol-forming gallstones. You can get this herb in supplement form — either liquid or capsule.

By implementing these lifestyle changes and natural treatments for gallstones, you can have greater success in preventing and treating the condition.