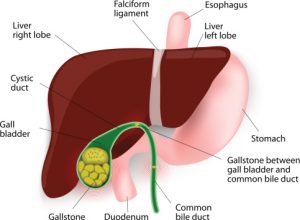 Fluid in the gallbladder that hardens is known as gallstones. Your gallbladder is responsible for holding bile, which is slowly released into the small intestine to aid in digestion. It is located on the right side of your abdomen just below your liver.

Although anyone can develop gallstones, there seems to be a link between a higher body mass index (BMI) and gallstone risk.

Gallstones can vary in size, with some being so small that you don’t know they’re even there, to larger in size stones that lead to health complications.

Gallstones, solid material found in the gallbladder, develop due to cholesterol and pigments found in bile.

There are two types of gallstones:

Cholesterol gallstones account for 80 percent of gallstones and are usually yellow-green in color. Pigment gallstones are small, dark, and made up of bilirubin.

It isn’t fully clear as to how and why gallstones form, but doctors have a few theories. For starters, if bile contains too much cholesterol, this can contribute to the formation of gallstones. Normally, bile contains enough chemicals to break down cholesterol, but if cholesterol levels are too high, then it can’t be broken down. Thus, it builds up, crystalizes, and eventually turns into stones.

Bile may also contain too much bilirubin, which is the byproduct of broken down red blood cells. Medical conditions that lead to excess bilirubin include liver cirrhosis, biliary tract infections, and certain blood disorders.

Lastly, if your gallbladder doesn’t empty properly, the bile can become concentrated and cause gallstones.

Although we understand what creates gallstones, it isn’t fully understood why they’re caused. What is known is that higher rates of gallstones are seen among the following:

Signs and Symptoms of Gallstones

Symptoms of gallstones include:

Other symptoms of gallstones may include jaundice, infections, pancreatitis, and biliary colic — a painful condition where a gallstone passes through a bile duct into the duodenum.

Complications resulting from untreated gallstones include:

Weight Loss and Gallstones: How are They Connected?

Previous research found a link between elevated BMI and an increased risk of gallstones in women. To reach their findings, the research team looked at 77,679 participants; 4,106 participants developed gallstones during the 34-year follow-up period.

Those who developed gallstones tended to be older, female, and less physically active. Gallstone patients were also more likely to be on hormone replacement therapy and consumed less alcohol in comparison to those without gallstones. Furthermore, a higher body mass index was shown to be a factor for gallstones as well.

“Obesity is a known risk factor for gallstone disease and our study suggests that elevated BMI likely contributes to the development of this disease. These data confirm that obesity adversely affects health, and lifestyle interventions that promote weight loss in overweight and obese individuals are warranted,” said research lead, Dr. Anne Tybjærg-Hansen.

Although a high body mass index has been associated with the development of gallstones, rapid weight loss can contribute to gallstones. When we lose weight quickly, it causes fat to be burned off quickly, which in turn allows for cholesterol to seep into bile and lead to cholesterol gallstones.

Some methods that make you lose weight rapidly and can lead to gallstones are weight loss surgery and consuming a very low-calorie diet. Furthermore, weight cycling can also lead to gallstones, as you dramatically lose and gain weight, which increases the risk of developing gallstones.

Therefore, it is recommended that you avoid crash diets or dramatic weight loss, especially if you want to avoid developing gallstones.

To properly diagnose cholelithiasis, your doctor will request several different tests to rule out other conditions along with confirming the diagnosis and checking the severity of the condition. These tests include:

If gallstones are not causing any symptoms, treatment may not be necessary, but if symptoms and complications do arise, your doctor may send you to a gastroenterologist who specializes in digestive issues.

A typical treatment for gallstones is to remove the gallbladder as we can live without it. But if a person cannot undergo surgery for other reasons, non-surgical options are available. Nonsurgical treatment involves dissolving the gallstones through either oral dissolution therapy or shock wave lithotripsy.

Surgical options for gallstone removal include:

To better prevent the formation of gallstones, it’s recommended that you avoid skipping meals, avoid drastic weight loss, and lose weight gradually. And above all, maintain a healthy weight, as it was outlined that a higher body mass index is linked with a greater risk of gallstones. This means eating well and exercising regularly.

By incorporating these prevention tips along with your doctor’s care into your daily routine, you can better treat gallstones and prevent future attacks.