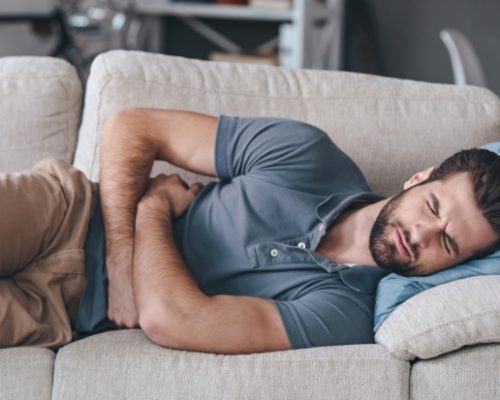 A gallbladder attack can feel like sudden pain accompanied by nausea, sweating, fever, and chills. This pain can last for a few minutes and disappear, or it can radiate upwards toward the shoulders.

Gallstones affect approximately 20 percent of women over 40 and eight percent of men. They can contribute to infection, which is commonly treated with antibiotics.

Common signs and symptoms of a gallbladder attack

Belly pain: This pain may be sudden or reoccurring. It can be quite severe. The pain originates in the upper right portion of the stomach, where the gallbladder is located, and can radiate to other areas of the stomach or upward to the right shoulder.

Indigestion: Digestion becomes impaired when the gallbladder is infected or when there are gallstones present, because the release of bile becomes limited. Bile is necessary to aid in digestion, so without it food cannot be properly digested.

Vomiting: Vomiting may occur after each meal and may begin with nausea. Vomiting may help relieve pressure and gas. Nausea can be present without vomiting, too.

Urine changes: If you have gallstones, you may notice changes in your urine. The pigment of your urine can change to a dark brown or yellow. A pinkish urine or blood in the urine could indicate an obstruction and kidney damage.

Diarrhea: Diarrhea can accompany a gallbladder attack. It is also a result of insufficient bile which your gallbladder is responsible for.

Stool changes: Stool may be of a different color, as bile is blocked and is not a part of stool anymore. Stool may appear light or chalky in color, and its consistency may be lighter, too.

Fever: This is a common symptom if there is an infection of the gallbladder present.

Chest pain: When bile is blocked or there is an infection present, acid is pushed from the stomach to the chest, causing chest pains. Chest pains resulting from a gallbladder attack may occur mainly after a meal – an important distinction from a chest pain associated with a heart attack.

Tips to diagnose a gallbladder attack

Risk factors for a gallbladder attack include having a family history of gallstones, eating foods high in cholesterol and low in fiber, being overweight or obese, having diabetes, being female, losing weight quickly, taking hormone-containing medications, and being of American Indian or Mexican American descent.

Gallbladder sludge may lead to gallstones in elderly – causes and treatments