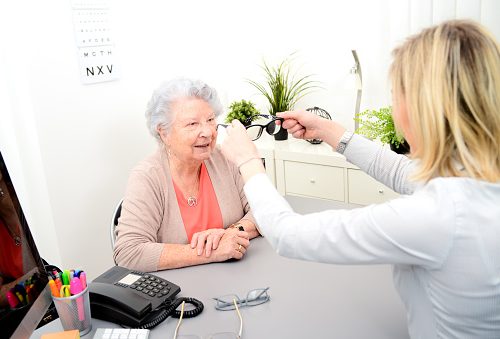 Researchers found small opacities that cover the blood vessels of the retina, which are an early indicator of Alzheimer’s disease. This is a breakthrough finding because it allows for patients to receive an earlier diagnosis, meaning caregivers can prepare themselves and treatment can be put into place. Because there is not a standard test currently established for diagnosing Alzheimer’s disease, looking into a patient’s eyes could be a safe and easy way for early detection in a disease that is continuously growing annually.

Alzheimer’s disease is the sixth leading cause of death in the U.S. and affects over five million Americans. Estimates reveal that cases could exceed 15 million by the year 2050. On the other hand, more and more treatments are being tested and approved as a means of slowing down disease progression. And if detection can occur earlier, these treatments can begin to work in earlier stages.

It is known that plaque buildup is a trademark of Alzheimer’s disease, and this plaque creates communicative problems between the brain and the neurons. Researchers found that plaque build-up in the retinas causes the same problem and it affects the primary visual cortex, which is the part of the brain responsible for processing sight.


The connection between the eyes and the brain starts as early as child development. While developing in the womb, eyes form from brain tissue.

An optometrist doesn’t simply check your eyes – they are able to obtain greater insight into your overall health. This is because disease activity can be revealed through the eyes, such as diabetes, for example. Furthermore, monitoring eye health is an affordable and non-invasive means of monitoring overall health too.

Therefore, if your eyes can showcase your health, it is equally as important to take the necessary steps to protect your vision as well. This means ensuring you are getting all your vitamins, protecting your eyes from debris and the sun, exercising, controlling other medical conditions, and going for regular eye exams to detect any problems early on.

Related: Reduce your risk of Alzheimer’s disease by doing this one thing
[adstoappear]

Brain structure may be a protective factor against Alzheimer’s disease