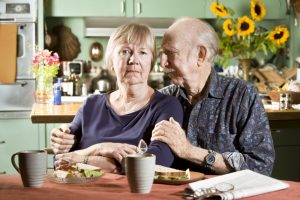 Dementia is an umbrella term for memory loss, but there are actually many different types of dementia. For example, it can be vascular dementia or frontotemporal dementia. But, dementia can also be reversible or irreversible.

Reversible dementia refers to types of dementia that can be partially or completely cured through treatment and proper management by targeting the underlying cause. Irreversible dementia is brought on by an incurable cause, so as it progresses the patient’s ability to care for themselves becomes largely diminished.

Irreversible dementia is often caused by damage to the brain that is irreversible. As changes occur, memory loss becomes more prevalent. In these cases, dementia cannot be reversed as the changes contributing to dementia have already occurred. Treatment for these contributing conditions will not improve memory.

In some of these conditions, dementia may appear early on – or it won’t appear until the disease has progressed further. Causes of irreversible dementia include:

These conditions leading to reversible dementia can be treated, and even cured in some cases, and that would reverse – either partially or completely – the effects of dementia.

Causes for reversible dementia include:

Environmental causes of dementia include anoxia, poisoning, and substance abuse.