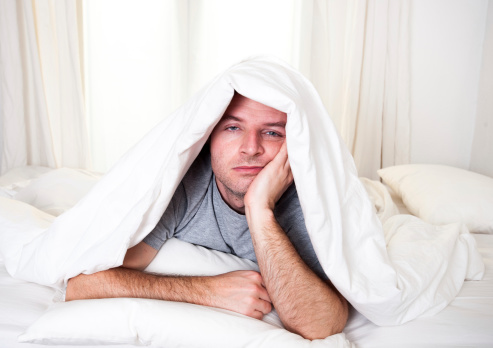 We all have difficulty falling asleep from time to time. Restless nights spent tossing and turning can ruin anyone’s day. For some of us, this is infrequent. However, there are some people who constantly struggle to get to sleep, and according to new research, these sleep problems may increase Alzheimer’s risk.

Alzheimer’s disease is a type of dementia that causes problems with memory, thinking, and behavior. It is not a part of normal aging, however, the greatest risk factor for its development is increasing age. The majority of those affected by the condition are 65 and older. The cause of Alzheimer’s disease is not well understood but is believed to be due to a combination of genetic, lifestyle, and environmental factors.

The results of this study now suggest that certain people who have difficulty falling asleep have a higher than normal risk of Alzheimer’s disease.

Looking for the markers of disease

What pointed researchers to this conclusion was signs of amyloid and tau protein markers found in those with poor sleep quality. These are the same proteins used as biomarkers in those with Alzheimer’s disease. Markers for brain cell damage and inflammation were also found in participants.

“This study and others in the field suggest that sleep may be a modifiable risk factor for Alzheimer’s disease,” said senior researcher Barbara Bendlin, an associate professor of medicine at the University of Wisconsin School of Medicine and Public Health.

Only an association found

The researchers go on to say that having poor quality sleep on a consistent basis doesn’t necessarily mean you will develop Alzheimer’s disease. They want to make it clear that these findings cannot prove that poor sleep causes the condition, but only that an association was observed between the two.

It is possible that changes in sleep pattern may affect the brain or vice versa.

The study in question involved 101 participants with an average age of 63. At the beginning of the study, all of the subjects had normal thinking and memory skills. However, all were considered at risk for Alzheimer’s disease development either because they had a parent with the condition or they carried the gene that increased their risk—the APO-E gene. Spinal fluid samples were tested looking for markers of Alzheimer’s disease.
Questions regarding quality of sleep were asked, and the researchers took into account other factors that may affect the results of the study.

The researcher found that biomarkers related to Alzheimer’s disease were found in most of the subjects, but not all of them.

“Since our ability to slow progression of Alzheimer’s is still quite limited, this is an important area for research so that we might be able to exploit sleep regulation therapeutically,” said Dr. Sam Gandy, director of the Center for Cognitive Health at Mount Sinai Hospital in New York City.

Sleeping in the side position may help reduce the chances of developing Alzheimer’s, Parkinson’s disease

Alzheimer’s disease, aging may cause sleep disruptions in elderly due to neuron loss