Home » Brain Function » Cerebral (brain) atrophy: Why your brain is shrinking and what to do about it 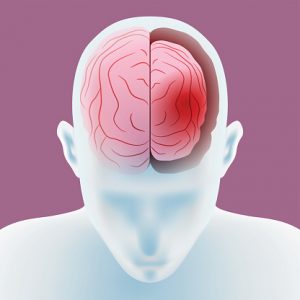 Cerebral atrophy or brain atrophy refers to the progressive loss of brain cells, called neurons, leading to decreased brain size. This phenomenon can occur to the entire brain or be focused on a singular part. The most troubling issue with cerebral atrophy is the potential for it to affect brain function, as the location of lost brain cells will potentially lead to neurological side effects.

What are the types of cerebral atrophy?

Also known as complete or total cerebral atrophy, this type of cerebral atrophy is characterized by shrinkage of total brain size. This means that the loss of brain cells is not restricted to a single region but to the entire brain as a whole. It is believed that voluntary functions and conscious thought are more likely to be affected with generalized atrophy of the brain.

What are the causes and risk factors for cerebral atrophy?

It has been documented that normal aging causes the brain to shrink by an average of 1.9 percent every 10 years, beginning in young adulthood and becoming more prominent in your sixties. After the age of 60, it has been reported that individuals lose about half a percent to one percent of brain volume every year. This is believed to be the result of the number of brain cells naturally declining with age. Some areas of the brain are affected by this generalized form of brain atrophy more than others, like the hippocampus, which is involved in memory. However, a person’s cognitive function is often not affected.

Brain disorders such as Alzheimer’s disease, Huntington’s disease, corticobasal degeneration, posterior cortical atrophy, multiple system atrophy, and progressive supranuclear palsy can cause significant cerebral atrophy. Often times, these conditions may begin as focal atrophy and then progress to a more generalized form, with some cases leading to the patient’s death.

Brain injury caused by stroke or trauma often leads to the obstruction of blood flow to the brain, starving it of vital oxygen and nutrients. This leads to brain cell death and subsequent brain atrophy. If not treated in a timely fashion, the possibility of cognitive deficits or even death is very likely.

Also read: What causes blood clots in the brain?

Not having sufficient amounts of vitamin B12 in the diet can lead to significant brain atrophy over time. A study done by the University of Oxford found that healthy volunteers with normal levels of B12 had more volume loss compared to other healthy volunteers with higher levels of the vitamins in their system. Vitamin B12 deficiency is one of the few preventable and reversible causes of cerebral atrophy.

Drinking more than 14 drinks per week has been linked to significant brain shrinkage, according to a study conducted by the John Hopkins Bloomberg Public School of Health. Additionally, the more you drink, the greater brain volume loss per year. Women were seen to be affected by this result the most, despite drinking less per week than men.

Interestingly, one study found that light to moderate amounts of alcohol may actually reduce the risk of dementia, of which cerebral atrophy is a significant contributor. In particular, wine was seen to be potentially beneficial for brain aging. However, more research is still needed.

Which brain parts are affected by cerebral atrophy?

While having generalized cerebral atrophy will affect the entire brain size as a whole, there are several instances where certain parts of the brain may be affected more significantly than others. In Alzheimer’s disease, the most common cause of dementia, the hippocampus and the cortex are two areas especially affected. These regions of the brain are responsible for forming new memories and helping us think, plan, and remember, respectively.

Another form of dementia called frontotemporal dementia is known for affecting the frontal and temporal lobes of the brain more significantly. These regions of the brain are known for being responsible for personality and behavior, which succumbs to atrophy as the condition progresses.

In cases of vascular dementia, the location of injury on the brain will determine what regions of the brain are affected. This will not only lead to neurological deficits but also cerebral atrophy.

What are the symptoms of brain atrophy?

How to diagnose cerebral atrophy

The only way to determine the size of the brain is to take an image of it. Medical professionals achieve this using several advanced imaging techniques, which include:

MRI is considered the most sensitive test and is the preferred method for detecting focal atrophic changes. Other characteristic features of cerebral atrophy include prominent cerebral sulci (cortical atrophy) and ventriculomegaly (central atrophy) without bulging of the third ventricular recesses. Additionally, specific conditions affecting the brain will present with their own unique areas of cerebral atrophy.

How to treat brain atrophy

Unfortunately, there is no treatment or cure for cerebral atrophy, with the majority of treatments focused on resolving presenting symptoms and possibly treating the underlying cause. Additionally, conditions that result in dementia do not have any truly effective measures of treatment, with only management of symptoms and support being the options currently available.

The following are some treatments utilized for cerebral atrophy treatment:

Prevention and prognosis of cerebral atrophy

Cerebral atrophy is not usually preventable, however, there are some things you can do to reduce your risk. These include:

The level of brain functioning is directly related to the area of the brain affected by cerebral atrophy. In the majority of cases of focal atrophy, fatal outcomes are not particularly common but can still cause impairment of normal functioning. Cerebral atrophy outcomes will generally vary from person to person, with advanced stages often leading to complete dementia.