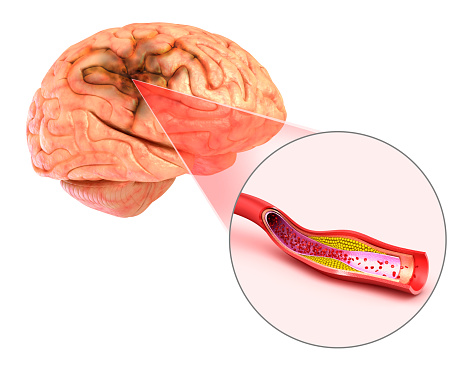 Cerebral ischemia is a type of stroke that occurs when blood flow to the brain is interrupted. A steady supply of oxygenated blood is required to maintain proper brain health and function. Prolonged cases of cerebral ischemia can cause the death of brain tissue as well as a loss of function.

An ischemic stroke can occur at any time, whether you’re sleeping, awake, or engaging in vigorous exercise.,. Your risk significantly increases if you have risk factors linked to cerebral ischemia.

Focal cerebral ischemia: This is when a blood clot has blocked a cerebral vessel, with blood flow being reduced to a particular brain region, increasing the likelihood of brain cell death of that area. Common causes of this phenomenon are due to thrombosis—a blood clot that develops in the blood vessel, or an embolism—a blood clot that originates from another part of the body, traveling up to the brain and blocking a cerebral blood vessel. Depending on the region of the brain that has been damaged, the presentation of symptoms will differ. For example, the posterior portion of the brain called the occipital lobe is responsible for processing visual information from the eyes. If this region falls victim to ischemic damage, you will most likely develop problems with vision or blindness.

Common symptoms of focal ischemia typically include dropping on one side of the face with paralysis likely extending to one side of the body. General signs include a severe headache, dizziness, or loss of consciousness.

Global cerebral ischemia: This is also a condition where blood flow to the brain is reduced, but instead of being focused on a particular brain region, the entire blood flow to the brain has been stopped or reduced. This is commonly triggered by cardiac arrest, which is when the heart stops pumping blood out to circulate throughout the body. Restoring blood circulation is of paramount importance.

This may occur due to cardiovascular abnormalities that lead to significant periods of low blood pressure, called hypotension. With prolonged periods of severe low blood pressure, insufficient oxygenation of tissues is the main cause of injury seen in ischemic attacks. Cardiovascular abnormalities may even slow blood flow to a point where blood begins to clot, leading to a blood clot or embolus formation that can travel to the brain causing an ischemic stroke.

Possible symptoms of cerebral ischemia include:

It is important to note that not all cases of cerebral ischemia or ischemic stroke will present the same. Depending on the extent of damage, the region of the brain affected—as well as how quickly treatment is initiated—will dictate the presentation.

Treatment for cerebral ischemic patients is time dependent, as the longer you go without treatment, the more significant the damage to brain tissue. Some of the most common medications used in an emergency setting attempt to restore blood flow by breaking up clots that may have formed. It is important to seek medical care within three hours of the onset of stroke symptoms for this medication to be adequately effective. Some cases may require more invasive measures, such as surgery.

The best method for preventing cerebral ischemia is to control risk factors that lead to the condition. Keeping a healthy diet and exercising will not only improve overall health, but also improve blood circulation. It is also a good idea to avoid smoking and drinking, as that may promote blood clotting and other harmful health abnormalities.