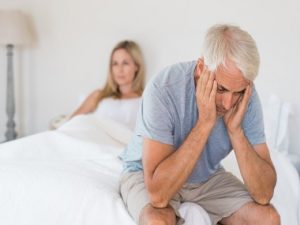 Low libido in men refers to a loss of interest in sex and all related sexual acts. A lack of or a low sex drive is one of the most common sexual dysfunctions and is often characterized by a decreased interest in your partner sexually. While it is normal from time to time, having a low libido for long stretches of time may indicate an underlying health condition that can be either physical or psychological.

This article will discuss in detail various low libido causes in men and the possible options men have for low libido treatment.

What causes low libido in men?

Low testosterone: Often referred to as having “low T,” low levels of the male hormone testosterone can decrease your desire for sex. Testosterone is primarily produced in the testicles and serves a number of different functions, from building muscle mass to stimulating sperm production. It is also an important factor ensuring a normal sex drive. Low testosterone levels fall in the range of 300 to 350ng/dl and can be a normal part of aging. Your doctor can help you identify potential cases of low T levels and provide treatment to help boost this back into normal ranges.

Medications: Commonly used blood pressure medication, such as beta-blockers and ACE inhibitors, may lead to a low libido in men. These medications may inadvertently prevent ejaculation and erections. If you are currently taking medications such as these, speaking to your doctor to find an alternative may be a good option.

Restless legs syndrome (RLS): Characterized by the uncontrollable urge to move your legs, it has been found that RLS is associated with the development of erectile dysfunction. A previously done study found that men with RLS occurrences at least five times per month were 50 percent more likely to develop erectile dysfunction compared to men without RLS and they were also more likely to become impotent.

Depression: Described as a serious mood disorder that can affect all aspects of a person’s life, including their libido. Depressed individuals often experience reduced or a complete lack of interest in activities they once enjoyed doing, like sex. To make this more complicated, the treatments often prescribed to clinically depressed patients, while helping to relieve the symptoms of depression, can cause low libido as a side effect. However, your doctor may find it permissible to lower the current level of antidepressant taken or switch to an alternative if appropriate.

Chronic illness: Not feeling well or having long term pain symptoms can make sex a low priority. Living a life with chronic pain or even cancer can make patients disinterested in sex, as they feel that getting healthy again is more important. Speaking to a marriage counselor or sex therapist may help resolve these issues.

Aging: Men between the ages of 60 to 65 generally notice a natural decline in their desire to have sex when compared to when they were young adults. Older men usually have a harder time becoming aroused and having orgasms. Additionally, it may take older men longer to get erections and they may have trouble maintaining them. However, there are many kinds of medications to help alleviate this common phenomenon of old age.

Stress: Perhaps the most sexual organ in the body is not the genitals, but the brain. While our brains can make all our sexual fantasies come true, it may also become distracted during periods of high pressure, leading to a decreased desire to have sex. Stress is also known for disrupting hormone levels, which may lead to the restriction of blood flow to the penis.

How to increase sex drive or libido in men

Try eating certain fruits: Several types of foods throughout human civilization have been touted as being aphrodisiacs, substances that increase libido. While little evidence has been found supporting this notion, they may provide important vitamins and minerals that help promote blood flow to the genitals. These foods include figs, bananas, and avocados.

Try eating chocolate: Known for its delicious taste, chocolate is also thought of as a symbol of desire, having the possibility of improving sexual pleasure. One study found that eating chocolate promotes the release of phenylethylamine and serotonin in the body, possibly helping to produce some aphrodisiac and mood lifting effects. However, chocolate’s effect may be more psychological than physiological.

Take your daily herbs: The scent of herbs such as basil or garlic helps stimulate the senses, possibly helping to boost libido. Garlic in particular contains high levels of allicin, which is known for increasing blood flow, and perhaps even helping men with erectile dysfunction when consumed. Ginkgo biloba is another herb that may help improve blood circulation and promote sexual libido.

Take a tip from Africa: The bark from the West African evergreen, known as yohimbine, is often regarded as being the “natural Viagra” as some studies have suggested that it can help maintain erections. It may also help enhance the quality of an erection, but not to the extent of pharmaceutical grade Viagra.

Boost your self-confidence: Your self-image is often a significant factor in regards to how you feel about sex. Having an unfit body may make you feel ashamed to unclothe in front of another and generally may make you avoid sex all together. By improving on yourself, whether it be getting back in shape or changing your mindset about sex, it can be a good way to help to enjoy sex again.

Take time to meditate and relieve stress: The sex drives of both male and females are controlled by the actions of the brain. By reducing stress levels, you can help your brain focus on having pleasurable sex. Popular stress relieving activities include participating in sports, performing tai chi, and taking yoga.

Get plenty of sleep: There is nothing worse than being too tired to have sex, but this is an all too common occurrence with today’s hard working men and women. Being over-worked is another factor that leads to low sex drives. However, by taking naps and eating a healthy diet high in protein and low in carbohydrates, you can help boost energy levels and your libido.

Keep your relationship in check: Arguments between significant others can put a damper on the mood for having sex and emotional intimacy. Instead try to resolve conflicts you may be having by promoting communication between the both of you, as this with help prevent the buildup of resentment and encourage a healthy sexual relationship.

Oysters: Often regarded as having a shape, scent, texture, and taste that suggests all things female. In fact, the manner in which they are eaten may also be seen as being sexual in nature. These attributes aside, oysters are a food with one of the highest zinc concentrations, which is a mineral necessary for the production of testosterone. Additionally, oysters contain D-aspartic acid and N-methyl-D-aspartate, two amino acids found to increase sex hormone in rat studies.

Truffles: Known for its musky and earthy smell, truffles are some of the most exquisite fine dining foods available today. It is known for containing androstanol, a pheromone commonly secreted in mammals to induce mating-like behavior in females.

Figs: Known for containing magnesium, a mineral required in the production of sex hormones like androgen and estrogen. Additionally, it also contains nitric oxide that may help to expand blood vessels and increase blood flow.

Almonds and walnuts: Packed with protein that can provide a boost of energy and stamina that can help you perform your best during sexual encounters. Scientific studies have even found that these nuts are a good source of selenium, which help fight infertility, as well as omega-3 fatty acids that help promote blood flow.

Asparagus: Contains high levels of folate and vitamin B6 which can help boost arousal and orgasms.

Avocado: Loaded with monounsaturated fats, vitamin B6, folic acid, and vitamin E. All of these substances can help boost your libido due to its antioxidant properties and their ability to increase oxygen and blood flow throughout the body.

Watermelon: Research has found that the lycopene, citrulline, and beta-carotene found in watermelon may help relax blood vessels while simultaneously increasing sex drive.

Sweet potato: Rich in vitamins A and C as well as anti-aging collagen, energy-boosting iron, and potassium, sweet potatoes can help fight against high blood pressure, a common risk factor for the development of erectile dysfunction.

Beets: A natural food that can help combat erectile dysfunction. By consuming 8.5oz of beet juice daily, you can help improve blood pressure as well as blood vessel dilation capacity. Frequent beet juice consumption has also been associated with a reduction in artery stiffness.

Cruciferous vegetables: Include Brussel sprouts, kale, cauliflower, and cabbage, these vegetables are not only part of a healthy diet but also have cancer-fighting properties. Additional, cruciferous vegetables can assist in the regulation of hormone, which in turn can boost testosterone levels.

Nuts: Raw, unsalted nuts can be just what you need to boost erectile function. Brazilian nuts, for example, contain modest amounts of magnesium, which can help elevate testosterone levels. Nuts also contain high levels of the amino acid L-arginine, which is considered a safe and effective way to enhance blood flow to the penis. Examples of other libido promoting nuts include raw hazelnuts, pistachios, and English walnuts.

Additionally, an improvement to overall mood and a drop in blood pressure was also noted. It is believed that these libido promoting attributes are the result of nitric oxide found in pomegranates which may help dilate blood vessels and promote blood circulation.

Experiencing a low sex drive will require significant investigation if it occurs frequently. Your doctor can help identify possible causes and provide you with the most appropriate treatments based on an underlying cause. Low libido in men natural remedies may help increase your desire, but they should not be considered a substitute for real medical treatment. If you are truly concerned about your lack of sexual desire, seeing a medical professional may help you find out the reasons behind your symptoms.