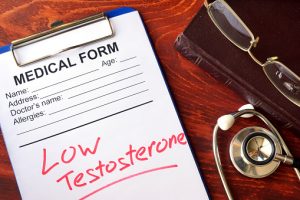 As testosterone is the primary male sex hormone, it is not surprising that most well-known signs of low levels of this hormone are associated with diminished masculinity in one form or another. If a man is not interested in sex anymore or has trouble getting or maintaining erections, or if he feels extremely tired every day even though in the past he was up and running from morning ‘til night, his testosterone levels may very well be plummeting. Loss of strength, muscle shrinkage, and weight loss struggles are also common symptoms of low T, along with the irritability and moodiness, that many aging men display.

It may be logical to conclude that once a man presents all the symptoms that turn him into a senior, his testosterone levels are likely to be low. But there are other, less common signs of a hormone deficiency that have nothing to do with one’s bedroom performance, libido, or muscle mass. Testosterone is extensively involved in many other processes in the body, and when it drops, other health aspects are affected too.

Decreased bone mass. Oftentimes, both men and women realize that their bones have grown frail when they experience a fracture. For women, weak bones and increased risk of fractures are usually associated with menopause aftermath and low estrogen, which is why women are usually more susceptible to bone conditions in old age than men. However, this doesn’t mean that men shouldn’t worry about their bone health because a decline in their testosterone can contribute to lower bone mineral density. (Reverse 10 years of bone loss?)

Numbness. A study published in Journal of Endocrinology investigated the role of testosterone in repairing nerve damage of the peripheral nervous system caused by diabetes, chemotherapy, or physical injury. On the other hand, insufficient supply of testosterone results in feeling numb, especially in the genital area.

Skin issues. Low testosterone can translate into skin dryness, which can aggravate various dermatological conditions, such as psoriasis. When compared in a study, male participants without psoriasis had higher levels of testosterone than those affected by the skin condition.
Cognitive changes. Falling testosterone levels may result in declining memory and cognitive function. While the mechanism behind this association has yet to be uncovered, older men with higher T fare better on cognitive tests, while high hormone levels in midlife have been linked to better preservation of certain brain tissues. Conversely, men who underwent androgen deprivation therapy fared worse on visual motor skill tests. (Get a razor-sharp brain at any age.)

The more you know, the better equipped you’ll be to take action when necessary. Being aware of these less common signs of testosterone deficiency may prompt you to get checked, even if you thought your levels were fine. However, it’s best to take action: talk to your doctor about ways to keep your testosterone in check or to boost your levels if they are below the norm.