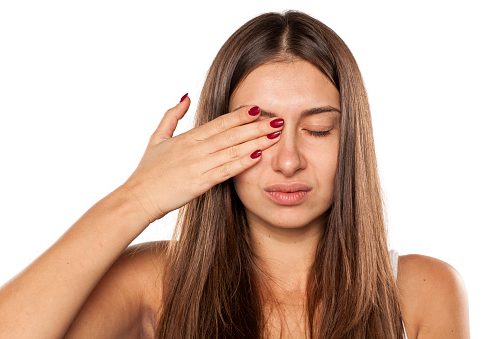 When someone experiences involuntary muscle spasms and contractions of the eye muscles, it is called blepharospasm. The term is often referred to as BEB or benign essential blepharospasm because it is not life-threatening, and the word “essential” in medical terms means “of unknown cause.”

Blepharo is a word used to describe the “eyelid” and spasm means “uncontrolled muscle contraction,” but just what does blepharospasm mean? Basically, anyone who has blepharospasm or BEB blinks abnormally or has an eyelid tic or twitch. This includes people who suffer from dry eyes, Tourette’s syndrome, or tardive dyskinesia, which is a disorder that leads to repetitive body movement, including grimacing and smacking of the lips.

People who have blepharospasm will often hear the word dystonia. This describes abnormal involuntary muscle contractions. It is important to point out that those with blepharospasm have normal eyes. The visual disturbance they experience is simply due to the forced closure of their eyelids.

BEB is considered a rare neurological disorder that impacts an estimated 50,000 Americans.

What are the types of blepharospasm?

Primary blepharospasm: In this case, a blepharospasm definition is dystonia that is characterized by involuntary contractions of the muscles in the face that closes the eyelids. These are called the orbicularis oculi muscles. It includes flickering of the eyelids and could be linked to apraxia of eyelid, which is difficulty opening the eyelid. Primary blepharospasm usually doesn’t appear along with symptoms of any other neurological disease.

Secondary blepharospasm: This type of blepharospasm is usually due to outside factors, including physical trauma, exposure to certain drugs, other neurological or metabolic diseases, and sometimes, brain lesions. It has been linked to Meige’s syndrome, which is characterized by forceful movements of the jaw and tongue; Breughel’s syndrome, a condition that causes facial, tongue, and neck muscle twitching along with clamping of the jaw; Extrapyramidal disorders, which are described as abnormal movements, such as tics and rigidity in the neck and extremities; as well as reflex blepharospasm, an involuntary reflex that can occur as a result of dry eye or irritation from light.

Of the two types outlined above, primary blepharospasm is the most common.

What are the causes and complications of blepharospasm?

There is still a lot to be learned about blepharospasm. Causes of blepharospasm are still being researched; however, the current theory is that it has something to do with the functioning of the basal ganglia, which is a group of structures in the base of the brain that are responsible for coordinating movement. Some believe that there is some sort of defect in a neuronal circuit that leads to blepharospasm.

Secondary blepharospasm causes might be due to organic disease. Some of the ocular (eyes or vision) causes are listed below:

When we talk about what causes blepharospasm, it is important to point out that there may be a genetic component, albeit small. There is just a five percent chance of blepharospasm being inherited.


It is also believed that symptoms of blepharospasm such as eye twitching can be attributed to stress in some individuals. Simply put, nerve activity is affected by stress. Some health experts also suggest that eye twitches may be aggravated by calcium and magnesium imbalances. In one case, a woman started suffering from blepharospasm after a long period of treatment with a calcium channel blocker she was prescribed for dizziness. In another case, a person with muscle weakness had elevated antibodies against calcium, but treatment with a potassium channel-blocker and an immune suppressant reduced the eye muscle spasms.

Some people with blepharospasm have been successfully treated with botulinum toxin (Botox). In one study, 90 percent of patients showed improvement with Botox within just a couple days. Still, there can be complications associated with such treatment, including those listed here:

What are the symptoms and risk factors of blepharospasm?

When blepharospasm symptoms begin, they are often frequent and include forced blinking and eye irritation. Certain stimuli, such as emotional tension, bright lights, wind, or air pollution can make symptoms of blepharospasm worse.

BEB almost always impacts both eyes. Some sufferers find that the frequency of muscle spasms increases and causes narrowing of the opening between the eyelids. In other words, it can become difficult for some people to keep their eyes open. In severe cases, a person’s eyes can be closed for several hours at a time.

For the most part, spasms and contractions happen during the day and seem to disappear when an affected person is sleeping. Symptoms of blepharospasm reappear when the person gets up in the morning.

There are studies that suggest that increased blinking may precede blepharospasm. Depression is also a symptom of this condition.

Although the study of blepharospasm goes on, a number of risk factors have been noted, including head and facial trauma, family history of dystonia, severely dry eyes, light sensitivity, extreme stress, and medications used to treat Parkinson’s disease. There was a time when health professionals thought that cigarette smoking was a negative risk factor for blepharospasm but recent research does not support this theory.

How to diagnose blepharospasm

History is one of the factors that are taken into consideration when making a diagnosis. History enables the doctor to determine if the patient’s condition might be primary blepharospasm or secondary blepharospasm. Episodes of involuntary twitching may interfere with a patient’s daily routine so that should be discussed along with a physical examination.

A physical exam may observe the involuntary movements and involve an ocular inspection. Neurological tests, such as MRI or CT scans, don’t really reveal anything about blepharospasm, but they can rule out other conditions. Laboratory tests are also of little use in the diagnosis of blepharospasm.

A panel of neurologists and ophthalmologists have assessed clinical features associated with blepharospasm. From the assessment, guidelines to help physicians diagnose blepharospasm were established. Involuntary eyelid narrowing, closure due to spasm, spasms around both eyes, spasm pattern, blink count at rest, and the inability to voluntarily suppress spasms are all factors that a doctor should be looking at in a patient.

There is no known cure for blepharospasm, but in most cases, it does not impact a person’s ability to live a full life. Most people with the condition are able to develop ways to cope, combining treatment such as Botox and emotional support.