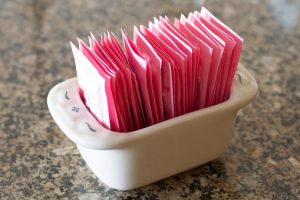 The study, conducted by researchers at George Washington University, discovered a close link between consumption of artificial sweeteners and metabolic syndrome, which occurs when someone experiences insulin resistance, elevated cholesterol levels, high blood pressure, and an increased risk of blood clots. Metabolic syndrome is normally diagnosed in people who are overweight or obese.

Metabolic syndrome should be taken seriously. It raises the risk of heart attack and stroke. It can also increase the risk of diabetes by three to five times.

Sen and the researchers also looked at human fat samples from obese people who consumed low-calorie sweeteners and discovered similar gene expression. The team has said that the findings are concerning, especially for those who are obese because they are already at an increased risk of heart attacks and stroke.

To carry out the study, the researchers took stem cells from human fat tissue and tested sucralose on them. They put the cells in Petri dishes for 12 days in a substance that promotes fat production to copy an environment that promotes obesity. At a sucralose dose of 0.2 millimolar, which is equal to about four cans of diet soda per day, they found increased expression of genes that are indicators of fat and inflammation.

The team also analyzed biopsy samples from different individual’s abdominal fat. Those who were obese and consumed low-calorie sweeteners showed significant increases in glucose transport into cells and “overexpression” of fat-producing genes, compared to those who did not consume low-calorie sweeteners.

Sen has stated that he is “confident” following this study, as well as a previous study that showed similar results, that sweeteners are causing “metabolic dysfunction.” He has also reported that in a new cell culture experiment, he discovered that sucralose seems to promote oxygen radical accumulation that causes disease and inflammation. These radicals can slow down metabolism, which can lead to fat accumulation. This just might explain how sucralose interferes with metabolism.

If you think you might be at risk for metabolic syndrome, talk to your doctor about testing.

How are diabetes and diarrhea connected? Causes, diagnosis, and treatment of diabetic diarrhea