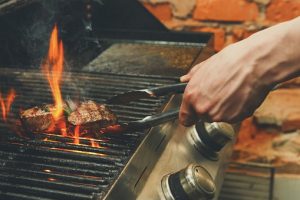 A new study from Harvard T.H. Chan School of Public Health has found a correlation between cooking meat over an open flame and the development of type 2 diabetes (T2D). Data were examined from 113,561 women and 24,679 men from three separate studies. Among them were nearly 8,000 diagnosed cases of T2D.

What they found was that in participants who consumed meat at least twice a week, there was an increased prevalence of T2D when there was also a higher frequency of meat being cooked over an open flame or at high temperatures.

“Independent of consumption amount, open-flame and/or high-temperature cooking for both red meat and chicken is associated with an increased T2D risk among adults who consume animal flesh regularly,” the authors write.

For those of you who like your steaks rare, there is new vindication for your BBQ preferences. Another new study has also found a link between over-grilling meat and an increased risk of high blood pressure.

The study consisted of data from 86,777 women and 17,104 men collected through three separate studies. None of the participants had high blood pressure at the beginning of the studies and provided the researchers with detailed cooking information and preferences. The patients were followed for between 12 and 16 years after the commencement of the experiment and by the end, there were 37,123 instances of high blood pressure.

“The chemicals produced by cooking meats at high temperatures induce oxidative stress, inflammation, and insulin resistance in animal studies, and these pathways may also lead to an elevated risk of developing high blood pressure,” said Gang Liu, lead author of the study. “Our findings suggest that it may help reduce the risk of high blood pressure if you don’t eat these foods cooked well done and avoid the use of open-flame and/or high-temperature cooking methods, including grilling/barbequing and broiling,”

Ultimately, the results of both studies show only correlational relationships between meat consumption, cooking methods and preferences, and the development of either T2D or high blood pressure. After all, correlation does not equate to causation and further research will be required to definitively prove these links and their causes.