Home » Brain Function » Sleep » Alcohol is not a sleep aid 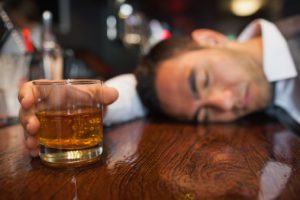 Falling asleep can be difficult for some. Our minds race, we toss and turn, and we find no benefit in common sleep tricks like counting sheep. Granted, on some nights it’s easier to fall asleep than usual, but most of the time it can be a real struggle. This makes us seek out solutions, with some of us turning to alcohol. One survey found that 15 percent of people drink specifically to improve their sleep. But is this really helping? Or is it just creating more problems for us down the road?

Anyone who has drunk alcohol can tell you that it puts you in a relaxed mood, promoting sleepiness. While this works for initiating sleep, several studies have found that alcohol does not improve sleep quality.

There are several stages of sleep, the most important of which is the rapid eye movement (REM) stage. As the name suggests, your eyes are seen to rapidly dart back and forth under your eyelids during this stage, and sleep studies have concluded that the REM stage is where the body restores itself and recovers from the stressors of the prior day. This is also the stage of sleep where dreaming occurs.

The stages of sleep

There are several stages of sleep that occur once we close our eyes. We progress from stage 1 to REM, and then the sleep cycle begins again. The stages are as follows:

Consuming alcohol robs us of REM sleep. While it may help induce sleep at first, later during the night it is disruptive. Decreased time spent in REM can impact concentration, motor skills, and even memory. Alcohol also results in more frequent awakenings throughout the night and increases alpha wave sleep, which makes us feel less refreshed in the morning and causes poor daytime functioning.

“The immediate and short-term impact of alcohol is to reduce the time it takes to fall asleep, and this effect on the first half of sleep may be partly the reason some people with insomnia use alcohol as a sleep aid. However, this is offset by having more disrupted sleep in the second half of the night,” said Irshaad Ebrahim, medical director of The London Sleep Centre in the U.K.

Using alcohol may trick you into thinking you’re getting better sleep, but the fact of the matter is, you’re not. It may even lead to alcohol dependence, which can cause even more health problems.

New study: The truth about alcohol and your health