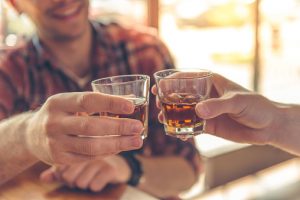 It is common knowledge that as we age, our mental ability starts to decrease. We start forgetting more, our thinking slows, and we generally need more time to perform mental tasks.

Alcohol for health has always been a mixed message, but it’s one that most will use as an excuse to drink more than they should. The current guidelines suggest drinking no more than one drink a day for women of all ages and men older than 65. Men under 65 years, however, may drink up to two drinks a day, owing to their generally larger body size over women.

Examples of one drink include:

According to a recent study, however, these guidelines are too generous. Researchers want people to question the supposed health benefits of alcohol.

The study in question involved 550 British adults of an average age of 43 who were followed for 30 years. Health and lifestyle habits were reported at roughly five-year intervals. A test of memory and other mental skills was also assessed. Toward the end of the study, a brain MRI was done on the subjects.

Researchers found that those who drank alcohol regularly showed greater brain shrinkage than non-drinkers, leading to a loss of language fluency—a measure of memory and thinking skill.

Similar outcomes were also seen among moderate drinkers who had roughly four to seven drinks a week.

Brain atrophy was found in the hippocampal region of the brain, which is responsible for memory processing. Moderate drinkers were three times more likely to have abnormal levels of atrophy in this brain region than non-drinkers, according to the researchers.

Moderate and heavy drinkers were proven to have a faster decline in language fluency over the 30-year period—14 and 17 percent greater reduction respectively.
“People should be skeptical of the idea that it’s actually healthy, and treat alcohol with respect,” said Tim Stockwell, director of the Center for Addictions Research at the University of Victoria, in British Columbia, Canada.

Less than moderate consumption is recommended

Mr. Stockwell was not involved in this particular study, but was involved in work researching alcohol’s positive effect on the heart. He thinks that many research studies promoting alcohol consumption carry flaws that mislead the public to think it is making them healthier.

The researchers stress that they cannot say that alcohol is directly responsible for the results observed during this study. They do think that the current guidelines for “safe” levels of alcohol consumption are too liberal and people should reduce their intake.