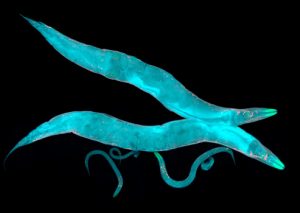 Aging is something that everyone goes through whether they like it or not. Getting older is still a mystery for us, as we don’t know why it occurs. We would all like to live forever, and understanding how aging works is that first step.

A team of investigators at Case Western Reserve University School of Medicine and University Health System may have identified a new molecular pathway that controls lifespan and healthspan in worms and mammals.

A family of proteins called Kruppel-like transcription factors (KLF), when found in excess in worm models, was found to live longer and healthier than normal worms. What is more interesting is that mice were also found to have this protein and it’s already shown to delay blood vessel dysfunction commonly associated with aging.

Additionally, when the researchers artificially increased or decreased this protein in small worms (Caenorhabditis elegans), they were actually able to make them either live for longer or shorter periods. What’s more exciting is the fact that this protein also exists in mammals and may have a similar effect.

“The observation that KLF levels decrease with age and that sustained levels of KLFs can prevent the age-associated loss of blood vessel function is intriguing given that vascular dysfunction contributes significantly to diverse age-associated conditions such as hypertension, heart disease, and dementia,” added senior author Mukesh K. Jain, MD.


A process behind why we age

When looking deeper into how the KLF protein functions, it was discovered that they work by controlling autophagy—an intracellular degradation system that is used to clear debris, such as misfolded protein or normal molecular by-products that build up within cells.

It is believed that the loss of this mechanism and its ability to ensure cells are performing efficiently is a hallmark of aging. Worms without KLF proteins were not able to maintain autophagy and found to die early.

“As cells age, their ability to perform these functions declines. This likely leads to an unsustainable accumulation of toxic protein aggregates, which ultimately present an obstacle to cellular survival,” say the authors.

The research team is currently studying the precise mechanisms behind KLF function and how they could begin to implement what they have learned into humans. They are optimistic that their findings provide a foundation for designing improved blood vessel function as we age.

Related: Both food calories and food smell contribute to the aging process: Study

Scientists find a way to potentially extend your lifespan