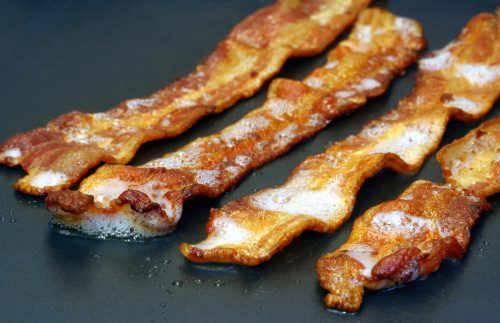 People around the world seem to have an obsession with bacon; in fact you can find it hiding in all sorts of products, even brownies and birthday cake. Despite warnings that too much can be bad for our health, some researchers argue bacon is getting a bad rap.

Meat lovers say it is one of the most intoxicating scents in the world; that it makes their mouth water just thinking about bacon sizzling in a pan. We don’t really have to imagine the strips of fat pork because they are everywhere…in salads, soups, mashed potatoes, burgers, pizza, dips, and even in desserts. You’ve likely heard of the sweet/salty craze, but have you tried a slice of chocolate bacon cake yet or a maple bacon donut? Maybe you’d prefer bacon s’mores. It turns out Americans enjoy these desserts regularly.

It all sounds like junk food, and the medical community has told us for years that the consumption of junk food can lead to obesity, increased risk of high blood pressure, and a long list of other health problems. Doctors warn that junk food is packed with sodium, as a preservative, and that freshly prepared foods are a good health alternative. Still, there are some consumers who just can’t give up their bacon. Some estimates of bacon consumption in the United States are as high as 1.7 billion pounds per year.

RELATED READING:  Wonder Bean Has The Power Of Svetol® So You Can Lose Up To 12 lbs In 4 Weeks

A recent Harvard study has linked 2 slices of bacon daily to a 20 per cent increased risk of death. The study looked at all red meats and observed the health of over 37 thousand men for a 22 year period and over 83 thousand women for a 28 year period. They documented health problems including cardiovascular issues and cancer. Family history and other disease risk factors were taken into consideration when compiling the data. The authors of this study say other research projects have shown that red meat, and in particular processed meat, is associated with chronic disease due to ingredients like sodium, saturated fat and nitrates.

There is research that suggests nitrates, which are used to give bacon its bright red color and to prevent bacterial growth in the meat, can damage your blood vessels. This can lead to hardening of the arteries and of course heart disease. Some nutritional scientists say that you would have to be a huge consumer of processed meat in order to be affected by the nitrates.

Dietary experts at St. George Hospital in London are defending bacon. They say when eaten in moderation bacon is not really that bad. They argue that there is no real evidence that eating processed meat once or twice a week is harmful to your health.

Pork, contains, B6, B12, iron, magnesium, potassium, zinc, and is high in protein. Food scientists say the key is to find low fat or lean cuts. The other good health tip is not to overcook your bacon or any other processed meat. Pork contains something called haem iron and when you blacken the meat, studies show the charred iron can turn into a carcinogen. Carcinogens are linked to cancer. One of the biggest stories to hit newsstands about bacon this past year was that it could increase the risk of pancreatic cancer. Swedish researchers announced in January that eating 2 slices of bacon or one sausage every day could potentially increase your risk of pancreatic cancer by 19 per cent. Again, St. George Hospital staff are shouting “everything in moderation”.

It is no secret that we all have to be careful about sodium and fat intake, but uncured meat is an option and we all have the ability to control portion. Most food experts don’t tell people to eliminate bacon from their diet, just modify intake when bacon seems to be in every item on the menu.