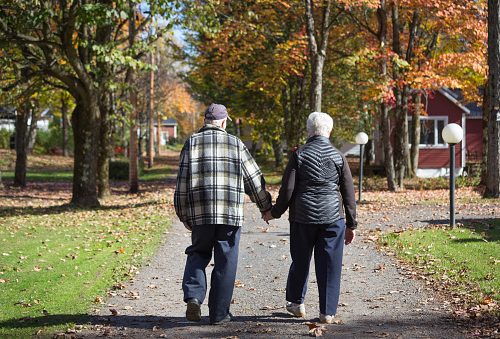 Memory loss can disrupt a person’s daily life, present challenges with planning or problem solving, and even make it difficult to perform previously familiar tasks. These are all attributes of a condition called Alzheimer’s disease, which affects nearly 5.5 million Americans today.

While being forgetful from time to time is not much of a concern, cognitive impairment (the decline in memory and thinking skills) can seriously affect your quality of life as well as the lives of people closest to you.

Unfortunately, there isn’t much a person can do to improve the condition once it develops. However, a new study from the University of California Los Angeles has found that walking more than 4,000 steps per day can improve attention and mental skills in adults 60 and older.

“Few studies have looked at how physical activity affects the thickness of brain structures. Brain thickness, a more sensitive measure than volume, can track subtle changes in the brain earlier than volume and can independently predict cognition, so this is an important question,” said Prabha Siddarth, the study’s first author and a biostatistician at the Semel Institute for Neuroscience and Human Behavior at UCLA.

Tracking the steps of elderly subjects

The study in question, which was done over two years ago, had 29 people over the age of 60 participate in the study. All subjects had previous memory complaints prior. They were divided into two groups: one walking more than 4,000 steps a day and the other walking less.

To evaluate the effect that walking had on participants, a battery of neuropsychological tests and MRI scanning of the brain was carried out.


The results of the study found that those people who walked more than 4,000 steps each day had thicker hippocampus and thicker surrounding regions. The lower activity group was found to have thinner brain structures.

An important structure of the brain

The hippocampus region of the brain belongs to the limbic system and plays an important role in the consolidation of information from short-term memory and long-term memory. The thickness of this area correlates with better cognitive function.

While this was only an initial study, the researchers would like to track participants over a longer period of time to evaluate the causes of a thinning hippocampus and the possible long-term effects it can have as we get older.

Related: Seniors get stronger by incorporating protein in every meal: Study

Seniors: This one thing helps you maintain strong muscles