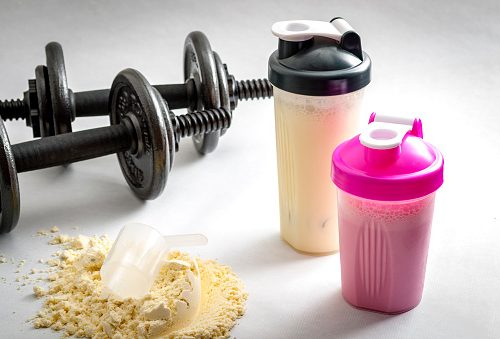 Now that you’re older, you probably don’t work out as often as you once did or don’t think about building muscle mass. However, it is actually important that seniors build and maintain muscles as they age.

Although the idea of hitting the gym several times a week doesn’t seem appealing, researchers at McMaster University have found that consuming whey protein—a common supplement that bodybuilders use—can help build strong muscles, particularly for men over the age of 70. Furthermore, the researchers found that the benefits of whey protein to build muscle increased when combined with exercise.

The study included two groups of men over the age of 70, where one group took whey protein and the other took a placebo over the course of six weeks. After six weeks, the groups continued on either the supplement or placebo but added exercise to their routine for an additional six weeks. The exercise routine included twice-a-week interval and resistance training sessions.

After the 12 weeks, those who took the supplements and exercised had the greatest muscle mass growth.

Ph.D. student who worked on the study, Kirsten Bell, explained, “Clearly, exercise is a key part of the greatly improved health profile of our subjects, but we are very excited by the enhancements the supplement alone, and in combination with exercise, was able to give to our participants.”

Not only did the study show the importance of supplementation and exercise, it also found that supplementation alone could go a long way in promoting the growth of lean muscle among seniors. Bell added, “I would certainly recommend the drinks to most older adults, particularly in situations where they may not be able to exercise, such as if they are injured, recovering from surgery, or ill. However, I would always advocate for increasing physical activity levels as well.”


Bell explained that the researchers are working to develop a product specifically for the purpose of building mass in seniors—something that is currently unavailable to the market. Although there are products currently on the market to promote good health among seniors, Bell says that these products simply do not contain enough protein to start creating muscle.

“Protein is important for supporting muscle mass, which we lose as we age,” Bell explained. “In fact, muscle becomes less responsive to dietary protein the older we get, meaning that we need to consume a higher dose per serving in order to actually stimulate muscle growth. This is why we recommend 30 grams to 40 grams per serving, rather than the 10-gram servings seen in other drinks.”

Not only is good protein found in meat, but there are non-meat alternatives including soy, eggs, brown rice, and whey, which can all help to promote muscle growth too. It’s important that seniors are eating well-balanced meals that include adequate protein to ensure they can maintain strong muscles.

If you’re unsure if your diet is providing you with enough protein, speak to your doctor or nutritionist to get pointers on how you can boost your protein levels.