Home » Liver » What are the symptoms of acalculous cholecystitis? Types, prevalence, causes, and treatment 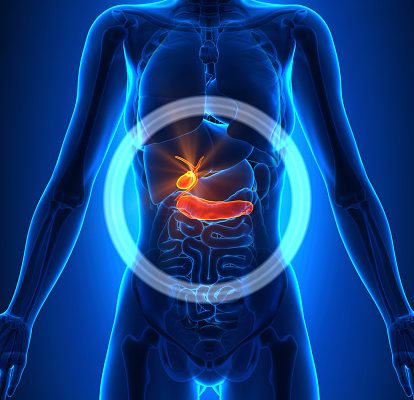 Acalculous cholecystitis is a severe illness and can be a complication of other medical or surgical conditions. It is associated with a more serious morbidity and higher mortality rates than those caused by gallstones. Acalculous cholecystitis is most commonly seen in very ill patients who are on mechanical ventilation, suffer from sepsis, or even after a severe burn or trauma. The condition affects all races equally at any age, but does have a slight predominance in males over females.

Characterized by a sudden development of symptoms in people without gallstones who are critically ill or have been critically injured. Additionally, patients with diabetes, malignant tumors, vasculitis, congestive heart failure, and shock or cardiac arrest may develop acute acalculous cholecystitis. The acute nature is often brought on by ischemia/reperfusion injury, however, bile stasis, opioid therapy, positive pressure ventilation, and total parenteral nutrition have also been found to play a role in development.

Having the disease over a long period of time that is also accompanied with biliary pain brought on by chronic gallbladder inflammation. It can be caused by other disorders affecting the biliary tract such as increased basal cystic duct resistance, cystic duct spasm, muscle hypertrophy, and chronic aseptic inflammation in the gallbladder wall.

Occurring in people who are severely ill and debilitated, it is believed that an impairment of blood supply to the gallbladder causes ischemia, leading to inflammation and a diagnosis of acalculous cholecystitis. Another possible cause is that critically ill individuals are unable to eat food normally, which compromises the ability of the gallbladder to contract and release bile. Pregnant women may also develop the condition as well as those with liver dysfunction and chronic infection.

Several risk factors have been linked to the development of acalculous cholecystitis. They include:

How to treat acalculous cholecystitis?

Considering the often critical nature of patients suffering from acalculous cholecystitis, immediate intervention through surgery is indicated as there is a high risk of rapid deterioration and gallbladder perforation. However, those who are not ideal surgery candidates are often put on palliative treatment via endoscopic gallbladder stent placement. This involves placement of a stent between the gallbladder and the duodenum during endoscopic retrograde cholangiopancreatography (ERCP).

Medical management tends to focus on relieving symptoms with the use of pain medications to relieve pain and fever as well as antibiotics to reduce the risk of infection if surgery is to be done.