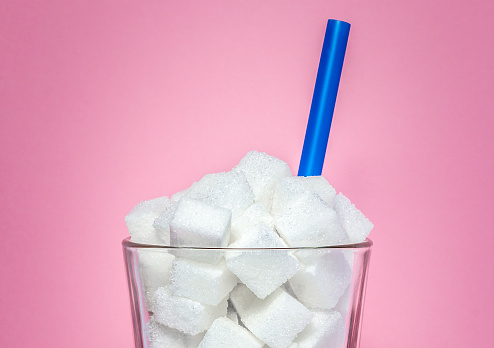 Sugar-sweetened beverages like soda hold much of the blame for America’s obesity epidemic. They have been linked to not only increased weight gain, but also to tooth decay, diabetes, and even heart disease. Soda is not the only drink to pin the blame on though, as Americans consume sugar-laden fruit drinks, sports drinks, and sweetened waters, often with a big meal.

This consumption during meal time has been the topic of study as of late. A group of researchers from the USDA-Agricultural Research Service Grand Forks Human Nutrition Research Center have discovered that having sugary drinks with high protein meals negatively affects energy balance, leading the body to store more fat than it otherwise would.

“We found that about a third of the additional calories provided by the sugar-sweetened drinks were not expended, fat metabolism was reduced, and it took less energy to metabolize the meals. This decreased metabolic efficiency may ‘prime’ the body to store more fat,” said Dr. Shanon Casperson, lead author of the study.

Their research involved 27 male and female participants of a healthy weight with an average age of 23. Participants received 15 percent protein meals for both breakfast and lunch after an overnight fast on one occasion, and on another visit, received 30 percent protein meals. Meals were balanced out of with a corresponding percentage of carbohydrates for each particular day. All meals were composed of the same foods. providing 17g of fat and 500 kcals.

The participants consumed a sugary drink for one meal and a non-sugary drink with the other meal. They were also required to stay in a room calorimeter for the duration of their meals, which allowed the researchers to determine how many grams of carbohydrates, protein, and fat participants were using, along with calories burned.

Even though the consumption of sugary drinks did increase the energy expended to digest the meal, the additional calories from the drink far exceeded what was required.

“We were surprised by the impact that the sugar-sweetened drinks had on metabolism when they were paired with higher-protein meals. This combination also increased study subjects’ desire to eat savory and salty foods for four hours after eating,” said Dr. Casperson.

Sugar sweetened drinks with meals impact the energy balance equation, the researchers go on to say. Additionally, when people drank these types of beverages, they were not more satiated despite consuming more calories. This extra ingesting of calories lead to reduced fat oxidation, providing insight into how sugar-sweetened drinks have led over a third of the U.S. population to become obese.

Popular diet drinks setting you up for heart disease?

How Soft Drinks Raise Stroke Risk By Over 80%