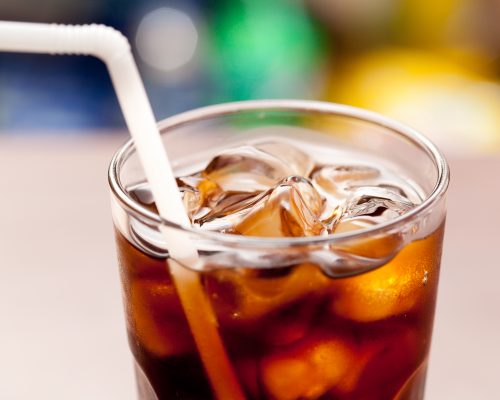 First thing in the morning, my brother-in-law has to have his diet soda. Roll out of bed, head to fridge and guzzle. I’ve been advised, when visiting their house, not to try to engage him in conversation before he has finished at least half his 20-ounce bottle. It’s true. He’s a friendly, down-to-earth guy with a smart sense of humor who can barely manage a grunted hello until after the bottle is done.

Well, what’s so bad about that, you may ask? Most everybody grabs for their morning cup of coffee (for me, it’s Tetley tea with milk) as soon as they wake up. It’s that customary caffeine hit your body needs to come alive. There’s more caffeine in diet soda than you think – around the 40 mg mark for 12 ounces where coffee can be 95 to 200 mg for eight ounces – and Greg, my not so health-conscious brother-in-law, has about four or more every single day.

He’s not alone. I like a sip or two on a hot day or lazy evening in front of the TV just as much. Pour it over ice in a tall glass with a slice of lemon and it sings refreshment! A survey by the U.S. Centers for Disease Control and Prevention from 2009 to 2010 found nearly one-in-five Americans drink diet sodas on any given day. About half of those people are drinking over two cups a day. This national habit has beverage-makers giddy with profits, but…

RELATED READING: Why thawing foods at room temperature could land you in the ER

When the dangers of diet soda start to add up

It’s the other things hiding in that fizzy, caramel-colored beverage that are not doing your body any favors, like potassium benzoate, a preservative to protect the product against mold (and boost its shelf-life) that’s been associated with cell damage. Then there are the artificial sweeteners that wreak havoc with digestion and can damage your kidneys. The phosphoric acid and caffeine combo of colas, both diet and regular, has been linked to tooth decay and lower bone density, especially in elderly women who are prone to osteoporosis.

Like me, you might have that nagging voice in your head that warns diet soda is bad for you, but why? You’d think it must be healthy and weight-friendly with zero calories and no sugar. What a scam, perpetuated by endless celebrity endorsements.

While health experts from the likes of the U.S. Food and Drug Administration (FDA) and Mayo Clinic staff says there’s no reason to label these drinks a risk to your health, although they’re open to the idea of further research. Despite this, there’s plenty of alarming data that should have you thinking twice.

New evidence from the Women’s Health Initiative Observational Study has found that postmenopausal women who drink two or more diet drinks a day are more likely to have an increased risk for heart attacks and diabetes, two big-ticket items that should be on your health prevention agenda.

The research pile continues to grow

Researchers from the University of Iowa Hospitals and Clinics who conducted the study were concerned about the lack of data about diet drinks and cardiovascular outcomes and mortality. They found just what they were looking for – data that is in line with and extends the information from previous studies that showed a strong link between diet drinks and cardiovascular disease.

They looked at nearly 60,000 women with an average age of 62.8 years, so we’re talking people in an age group when health issues like high blood pressure and type 2 diabetes are common. These women are at a point in their lives when they should be doing all they can to protect their bodies from disease. With good lifestyle habits, those senior years can be golden, allowing more time for leisure pursuits. But you have to have those good habits in place to reap the benefits, or dedicate yourself to making healthy changes and follow through. Ditching the diet soda falls into the good habit column.

This is the largest study to look at the relationship between diet drinks and heart health, taking into account factors like participants’ BMI (body mass index), physical activity levels, and other lifestyle choices.

RELATED READING: Warning: Your water could be making you sick

How can I convince my brother-in-law to sub in coffee instead? While it’s had its share of bad news headlines, I’m convinced that a cup or two a day is good for us. But not diet soda.


Delicious and refreshing in moderation

I’m not saying you should vow to never touch another drop, but enjoy it on occasion only. It’s probably what Dr. John Stith Pemberton, the Atlanta pharmacist who first produced the beverage syrup for Coca-Cola in 1886, intended. Carbonated water was added to this “Delicious and Refreshing” drink and sold for five cents a glass at pharmacy soda fountains as a special treat – not a two-20-ounce or more daily drink that many people reach for instead of healthy water. Now the latest marketing ploy is replacing the iconic logo with a personal first name, so you may find your name on the bottle label. So that bottle is literally calling out to you.

The food and beverage industry really is driven by consumer demand, so instead of seeing sales skyrocket and kids drinking more than ever before, we need to buy less of the fizzy junk, and do something good for our health instead. Do you hear that, Greg?!